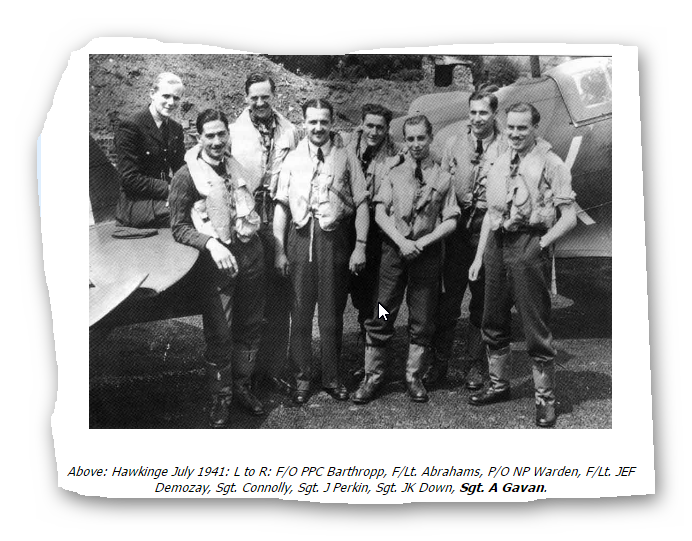 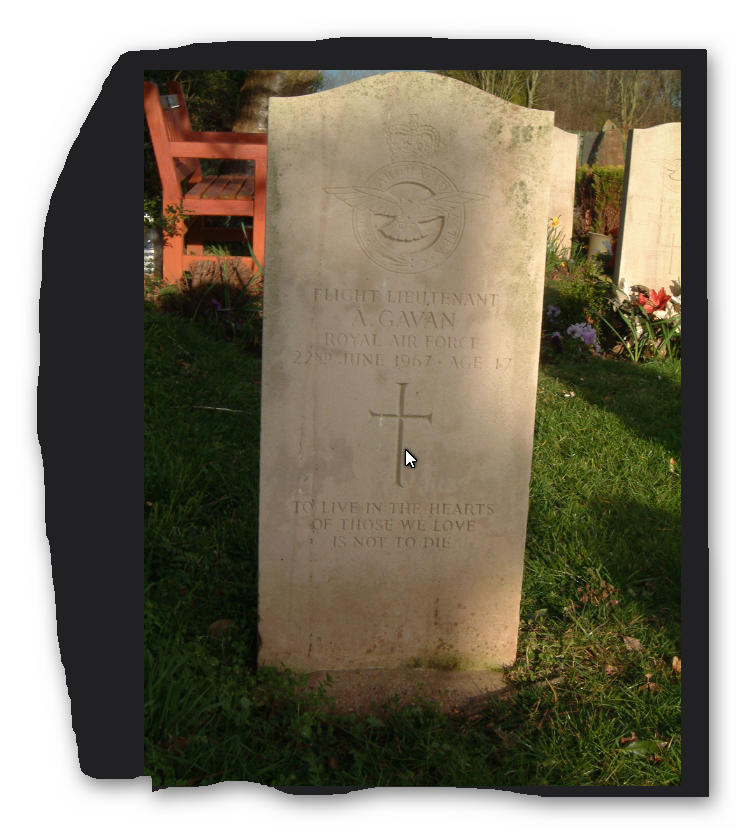 < = expand >
Arthur Gavan was born on 5th April 1920 at Kingston-upon-Hull and joined the RAFVR in August 1939 as an Airman u/t Pilot. Called up at the outbreak of war, he completed his flying training and converted to Spitfires at 7 OTU Hawarden. He was posted to 54 Squadron at Catterick on 16th September 1940.

Gavan served with the squadron throughout the Battle of Britain and was posted away to 421 Flight at Hawkinge on 15th December 1940. The Flight was re-numbered 91 Squadron and expanded to squadron strength on 18th January 1941.

Gavan went to 53 OTU Llandow on 28th August as an instructor. Commissioned in December 1941, he moved to 59 OTU Longtown, Northern Ireland on 30th March 1942. From 20th September 1942 to 8th February 1943 Gavan was in the RAF Hospital Halton, the result of being knocked off his bicycle in a road accident. He returned to 59 OTU and served there until 21st July 1943 when he was posted to RAF Cranwell.

After a course at 2 FIS Gavan returned to Cranwell and instructed at 17 FTS there until July 1944, when he moved with it to Wellingore. In mid-January 1945 Gavan was posted to the USA, crossing the Atlantic in the Mauretania, to be Assistant Chief Flying Instructor at No. 1 BFTS, Terrell, Texas. He returned to the UK in November 1945, returned to Cranwell and was released from there on 12th January 1946, as a Flight Lieutenant.

Gavan went to work for Redcar Town Council and also joined 608 Squadron Royal Auxiliary Air Force at Thornaby. He rejoined the RAF at Hendon on 6th August 1952, went on a refresher course at South Cerney and after a further course at CFS Upavon he resumed instructing.

After a return to the UK Gavan carried out a number of rescues over the North Sea, some in very bad weather conditions, with 202 Squadron at Coltishall for which he received a Mention in Despatches. He went to British Guyana in 1966 with a detachment on peacekeeping duties.

On 22nd June 1967 Gavan was killed when Whirlwind HAR Mk. 10 XJ414 broke up and crashed into the sea off Caistor after a main rotor blade detached. The aircraft was one used by his flight in British Guyana and had only flown ten hours after a complete manufacturer's overhaul. Master Navigator H W E Crossman and Flt Lt. G A Pink were also killed.

Gavan is buried in Scottow Cemetery.