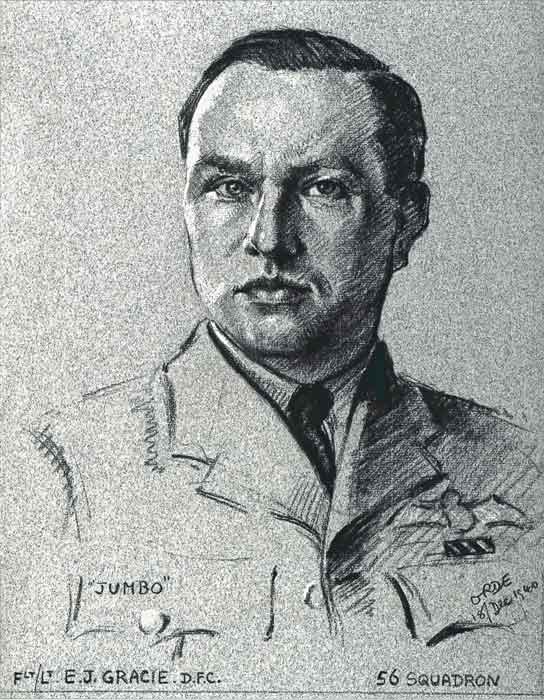 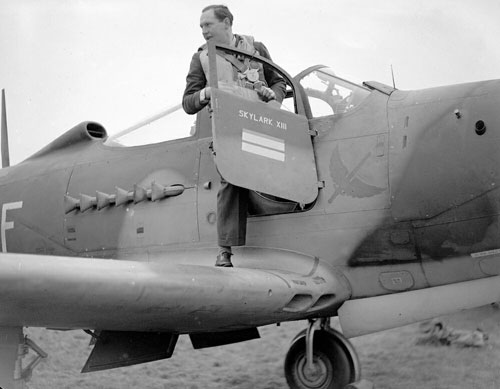 < = expand >
Edward John Gracie was born in Acton on 21st September 1911 and joined the RAF on a short service commission in June 1930. He was dismissed by sentence of a General Court Martial on 19th June 1933, the reason for this is currently undocumented.

In March 1937 he was granted a five-year commission in Class A of the RAFO. Called to active service on 3rd September 1939, Gracie was serving with 79 Squadron at Manston in early 1940.

In this last action Gracie was himself shot down, crashing and burning out near Halstead, in Hurricane P3554. Gracie believed himself unhurt but discovered next day that he had a broken neck and was admitted to hospital.

He rejoined the squadron on 8th October 1940.

Citation:
"This officer has destroyed seven enemy aircraft and damaged another five. By his outstanding leadership, skill and courage, he has proved an excellent example to all."

Posted away from 56 for a rest on 7th January 1941, Gracie was given command of 23 Squadron at Ford in March. During the night of 14th/15th March he got a probable Do17, intruding in a Blenheim over Merville in France.

He took over 601 Squadron at Northolt in late April and remained with the squadron until 24th December 1941.

He was then posted to Malta and took command of 126 Squadron at Ta Kali in March 1942, when he led Spitfires off the carrier HMS Eagle to replace 126's Hurricanes.

Gracie damaged a Ju88 on 26th March and claimed a Ju88 probably destroyed on 2nd April. He went to Gibraltar soon afterwards to join the carrier USS Wasp and on 20th April he flew off, leading twelve Spitfires of 601 Squadron to Malta. The next day Gracie claimed two Ju88's, another probable and damaged two others and on the 23rd he shared a Ju87.

On the 29th Gracie was promoted to Acting Wing Commander and appointed Station Commander at Ta Kali.

He returned to the UK in June 1942 and commanded 32 Squadron at West Malling briefly in September. Gracie was posted to Ayr on 1st October 1943 to form and command 169 Squadron, to operate in Mosquitos on bomber support. He flew the squadron's first operational sortie on 20th January 1944, a night escort to Hamburg during a Berlin raid.

Gracie was killed over Germany on 15th February 1944 as a Wing Commander.

Mosquito II HJ707 VI-B was attacked by a night-fighter near Hanover during a night intruder sortie. The starboard engine caught fire. The navigator, Flt Lt. WW Todd, baled out but Gracie was unable to leave the aircraft before it crashed.

Photo - Gracie with a 601 Squadron Airacobra

Portrait was made by Cuthbert Orde