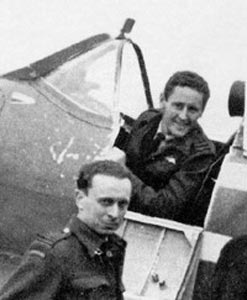 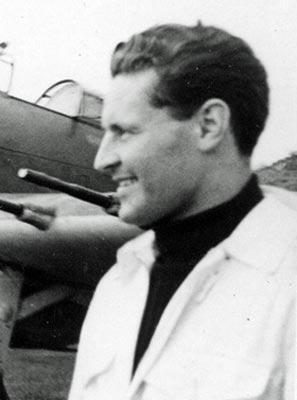 < = expand >
Philippe de Scitivaux of Greisch was born on 8th November 1911 at Rosnay in the department of Indre. His father, a cavalry officer, was killed in action in August 1914. Educated at Poitiers and Stanislas Jesuit College in Paris, de Scitivaux entered the Naval Academy in 1931. He graduated as an Ensign 2nd class in 1933 and served on the cruiser Tourville, the battleship Bretagne and the submarine Juno.

Transferring to the naval aviation arm, he qualified as a pilot in 1937. At the time of the German onslaught on 10th May 1940 he was serving with Escadrille AC1 of Flottile F1C, operating Potez 631 aircraft from Calais-Marck. On this day he shot down a Ju52 over Ijmuiden, Holland but despite being badly wounded in one arm he brought the aircraft back.

De Scitivaux was admitted to hospital in Boulogne and was still there when the Germans arrived at the outskirts of the town. He made his way to the port area and, forming a crew from some sailors also trying to escape, convinced a Belgian tug master to take them all to England. They landed at Hastings, where de Scitivaux collapsed. Once recovered, he insisted on returning to France to continue the fight. But once the Armistice had been signed, he flew to Gibraltar and boarded the French armed trawler President Houduce, which was already loaded with French airmen from Casablanca. They arrived in Liverpool on the 13th July. Waiting for his arm to completely heal, he was made ADC to Admiral Muselier. Once recovered, he joined the RAF, reporting to 6 OTU Sutton Bridge on 29th September 1940.

After conversion to Hurricanes, de Scitivaux joined 245 Squadron at Aldergrove on 14th October, going on to 253 Squadron at Kenley on 27th November and then to 249 at North Weald on 29th March 1941. Further postings to 242 at Stapleford on 27th April and finally to 615 Squadron at Manston on 19th September followed. By then he had two confirmed victories, a He111 over London on 11th May 1941 and a He59 over Ostend three days later.

De Scitivaux was posted as a Flight Commander on 10th November 1941 to 340 Squadron ‘Ile de France’, the first Free French fighter squadron, then forming at Drem. He took over as CO on 31st January 1942 but had the misfortune to be shot down on the squadron’s first sortie in Spitfire BL909 ML-A on 10th April 1942. He baled out and landed in a tree in Condette, south of Boulogne, and was captured wounded in both legs and both arms. Two days later his fiancee arrived in England, after travelling for eighteen months through Algeria, Portugal, South America and the Bermudas.

De Scivitaux spent four months in hospital and was then moved to a PoW camp. He escaped but was recaptured and moved to a stricter camp in Silesia. He made three escape attempts from here, the third being successful and he had got as far as Paris by March 1945, being liberated there. Camp - Sagan & Belaria PoW Number 39631

He then returned to a successful career in the French Navy. Appointed head of the naval mission in Washington in 1946, he played a leading role in the revival of French naval aviation. Seagoing appointments were followed by command of the naval air station at Port Lyautey in Morocco in 1953. After service as professor in the College of Advanced Military Studies (CHEM) in 1957, he was promoted Admiral in 1960 and became commander of the maritime district of La Pallice-Rochefort. This was followed by C-in-C Pacific from 1962 to 1964 and from 1964 to 1966 he chaired the standing committee on testing of vessels of the fleet (CPEBF). As Vice-Admiral in 1966 he was appointed Prefect of the maritime area Toulon and then C-in-C Mediterranean. He was member of the Supreme Council of the Navy (MSC) from 1969 to 1971, following which he retired to French Polynesia.

De Scitivaux died at Toulon on 10th August 1986 and is buried at Anneyron near Lyon.