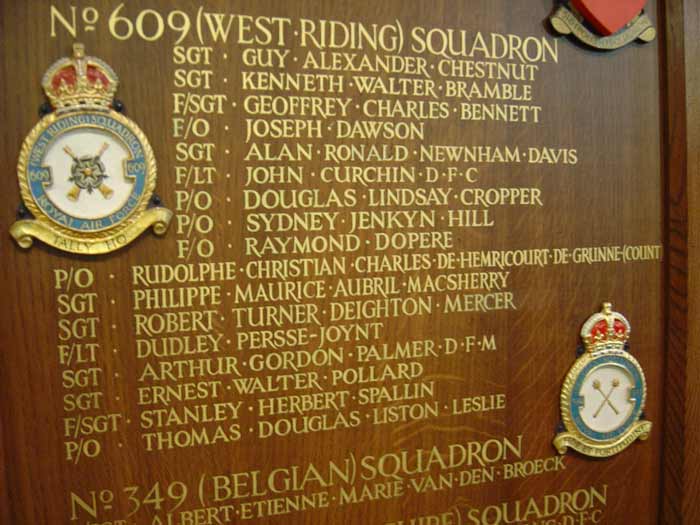 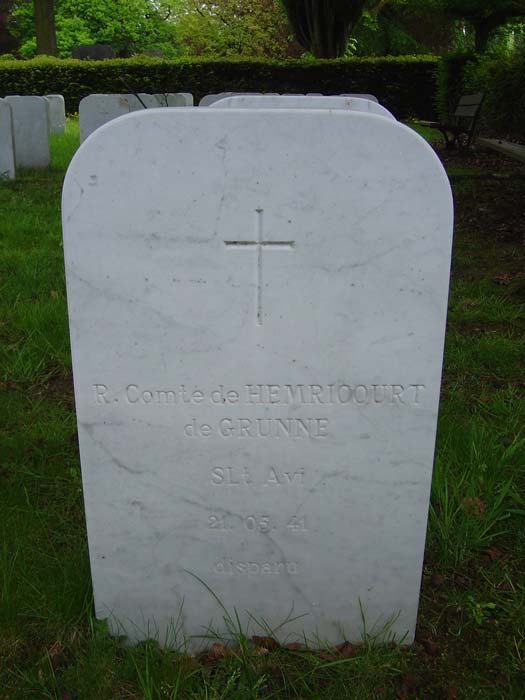 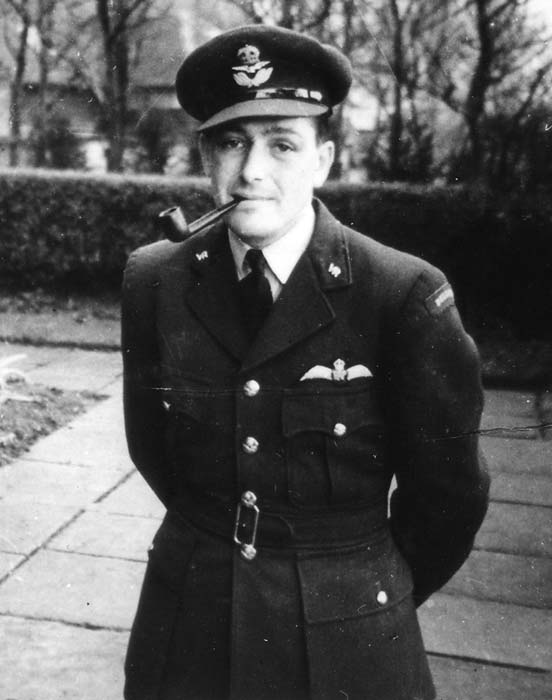 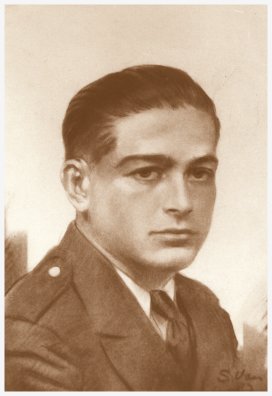 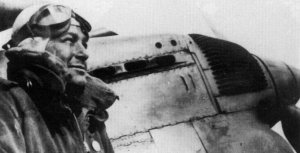 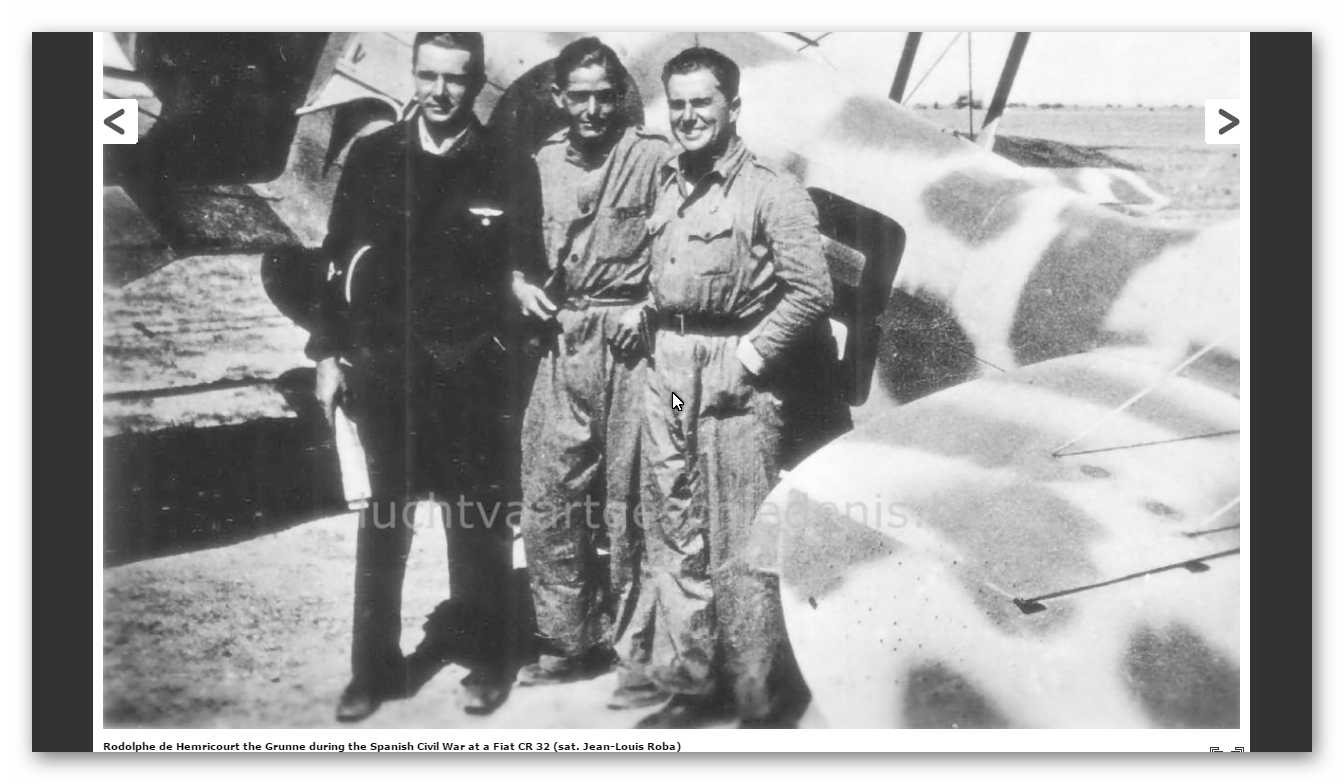 In September 1936, he volunteered for service with the Nationalist forces in Spain, joining a unit of the Falange formed mainly of Argentinean troops. On 19th November he was wounded in the right leg, and whilst in hospital encountered a wounded pilot who was interested to learn that his neighbour in the ward was a nobleman with a flying licence.

In consequence, he attended the Escuela Tablada (Flying School) at Seville in December 1936 and on 1st February 1937 joined squadron 3-G-11 at Saragossa, to fly He46 reconnaissance aircraft. In March he moved to 1-G-2 on He51 fighters, seeing action over the Aragon Front. On 1st November 1937 he was moved to 4-G-12 on Meridionali Ro37 army co-operation aircraft, and then on 8th December to 3-G-3 on Fiat CR32 fighters. On 15th he moved to the similarly equipped 2-G-3 and he was often in action over the Teruel Front.

In March 1938, the Group took part in the Aragon offensive and on the 12th of the month 2-G-3 encountered enemy aircraft attempting to stop the sweeping advance. During the afternoon eighteen Fiats, led by Commander Angel Salas Larrazábal, escorted Ju52’s on a raid and, having completed this task, made a sweep of the front as far as Hijar where they encountered twenty Chatos. In the ensuing dogfights, Salas claimed one probable while Garcia Pardo destroyed one Chato which fell near Hijar. The wreckage of this machine was recovered and a piece of it was retained on which ensuing victories of 2-G-3 were recorded, as well as the names of all those in the group who were killed. De Grunne was credited with an enemy machine.

On 1st September Garca Pardo and de Grunne surprised a squadron of Grumman Delfins and managed to destroy one each.

On 20th September a series of daily battles began, on the 22nd de Grunne claimed two victories (one I-16 and one I-15) followed by one I-16 on 2nd October and another I-16 the next day. He claimed his last victory in Spain when he claimed an I-15 on 2nd January 1939 over Ciervoles. By now he had claimed 14 victories.

With the end of the war in Spain he returned to Belgium in June where in September 1939 he was mobilised - but into the infantry as he was only registered with a civilian pilots licence. After making strong representations he gained a transfer to the Aviation Militaire Belge as a 2nd Lieutenant in 1940. He was sent to a pilot school, and rapidly received his military licence, being posted to 2/I/2 Groupe at Schaffen on Hurricanes.

He engaged an intruding Do17 on 12th March 1940 but had to break off due to mechanical failure. Following the destruction on the ground of all the unit's aircraft at the start of the German attack in May 1940 he withdrew to France with many other pilots, leaving for England on 20 June on the SS Apapa and reaching Liverpool on 7th July.

He was commissioned in the RAF on 19th July as a Pilot Officer. After training at 7 OTU, Hawarden, he was posted to 32 Squadron at Biggin Hill on 9th August. On the 16th he claimed a Me109 off Dover. The next day he claimed another Me109 as damaged. On 18th August he claimed a shared Do17 before being shot down by escorting Me109’s, baling out of Hurricane V6535 near Herne Bay and landing seriously burned near Ruckinge. On release from hospital in February 1941 he went to Portugal to recuperate. It was reported that he was involved in some espionage there but, while he may well have met some of his Civil War acquaintances, this is nonetheless unlikely.

Returning to the UK, he joined 609 Squadron on 28th April 1941 but on 21st May, whilst involved in a 'Circus' escorting Blenheims to Bethune, he was shot down over the Channel in Spitfire P7521 by a Me109. He baled out over the Goodwin Sands, but a lifeboat from Ramsgate failed to find him.

On 21st July 1941, Belgium National Day, War Minister Gutt made awards of the Croix de Guerre at Wellington Barracks, London, de Grunne’s being received by his sister. During the same year in Spain a number of awards of the Cruz Militar were made on the day of Our Lady of Lareto; one of these was for de Grunne. He is commemorated on the Runnymede Memorial Panel 32. and, in accordance with Belgian practice, has a memorial grave at Evere Cemetery, Brussels -