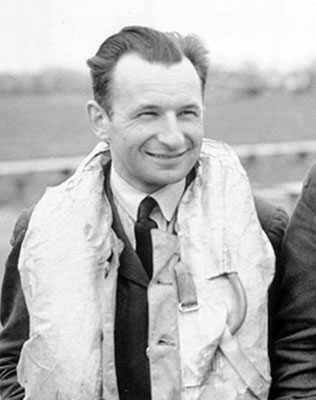 < = expand >
Marian Chelmecki was born on 2nd August 1916 in Jaslo, Poland. Chelmecki was in the Polish Air Force before the war. He graduated from the Air Force Flying School, Deblin and was posted to 122 Fighter Squadron of the 2nd Air Regiment. In 1939 he was transferred to Deblin as an instructor.

After Poland collapsed, he escaped to Romania, then to the Polish depot at Lyon-Bron in France from where he was sent to England, arriving in early 1940. He was commissioned in the RAFVR on 3rd May and transferred to the Polish Air Force on 6th August.

In mid-July 1940 Chelmecki was posted from the Polish Wing at 3 School of Technical Training Blackpool to 15 EFTS Carlisle. On 6th August 1940 he went to 6 OTU Sutton Bridge and after converting to Hurricanes joined 56 Squadron at North Weald on the 31st, moving to 17 Squadron at Debden on 11th September.

Chelmecki was detached to 257 Squadron at Martlesham Heath on the 17th and rejoined 17 Squadron on 24th September. He destroyed a Ju87 on 8th November, shared in damaging a Do17 on the 9th and destroyed a Me109 on the 11th.

Chelmecki was posted from 17 Squadron to RAF Debden on 27th November as non-effective sick.

From 17th May to 21st September 1943 he served on the staff of 2 Polish Wing at Hutton Cranswick, after which he joined 317 Squadron at Northolt. He was awarded a second Bar to the KW (gazetted 7th July 1943).

Chelmecki was posted on 9th November 1945 to the Ferry Pool of the Enemy Aircraft Salvage and Service Unit at Hamburg-Fuhlsbuttel, for flying duties. He was released on 8th August 1946 and returned to Poland in 1948, settling in Zabrze.

Although persecuted by the communist regime he was able to find employment as a technical specialist in the water and sewage industry, retiring in 1979.