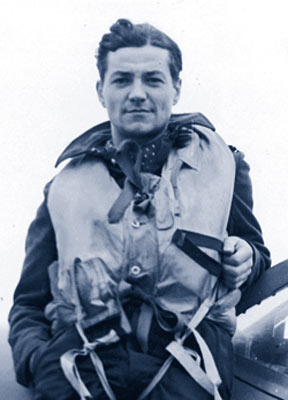 < = expand >
Jerzy Radomski was born on 18th July 1915 in Poland and joined the Polish Air Force before the war. At the time of the German attack he was serving with Fighter Squadron 113. On 1st September 1939 he destroyed a Me109 and probably a He111 and on the 5th he shared in the destruction of a Ju87.

After the fall of Poland, Radomski made his way to France via Romania and joined l'Armee de l'Air. In June 1940 he was serving with Groupe de Chasse 11/10, operating the MB152 at Bernay near Amiens. On the 7th he shared a Me109.

It is thought that after the armistice he flew to North Africa and then made his way to England via Casablanca and Gibraltar.

After assessment and training at 3 School of Technical Training at Blackpool he was posted to 303 Squadron at Northolt on 21st August 1940. He was then sent with other airmen to 5 OTU Aston Down on 3rd September to convert to Hurricanes. On the 4th he crashed in Master N7954 but was unhurt. Radomski rejoined 303 on 27th September and on the 30th he shared a Do17. On this day his Hurricane, P3663, was severely damaged by Me109's over mid-Channel and Radomski crash-landed on the beach near Lydd, unhurt.

Radomski was posted to 222 Squadron at Drem on 27th August 1942 but was back with 303 Squadron, then at Kirton-in-Lindsey, on 8th December. He moved to 317 Squadron at Perranporth on 28th June 1943, damaged a Fw190 on 26th July and was appointed a Flight Commander on 2nd September. He claimed a Me109 destroyed and another damaged on the 8th.

Rested from operations, Radomski went to HQ PAF Blackpool on 8th April 1944, was posted to PAF Staff College on 2nd January 1945 and afterwards served at HQ 46 Group on administrative duties. He was released from the PAF in November 1946 and awarded a third Bar to the KW (gazetted 31st October 1947).

Radomski joined the RAF in 1951 and was recorded as instructing at 6 FTS Acklington as late as June 1962. He later went into the Catering Branch. He retired on 18th July 1973 as a Flight Lieutenant, retaining the rank of Squadron Leader.