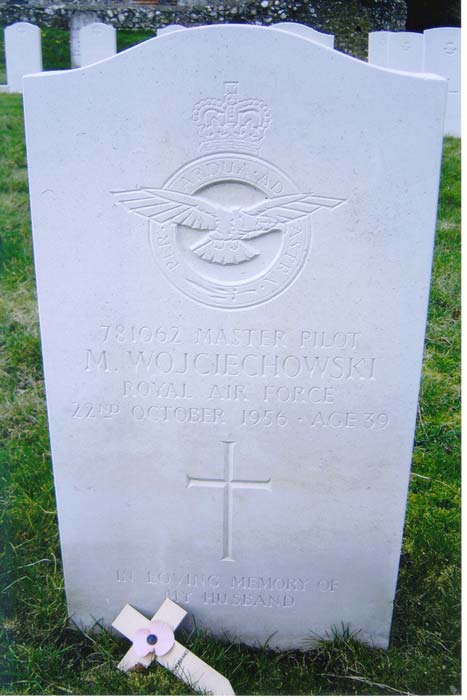 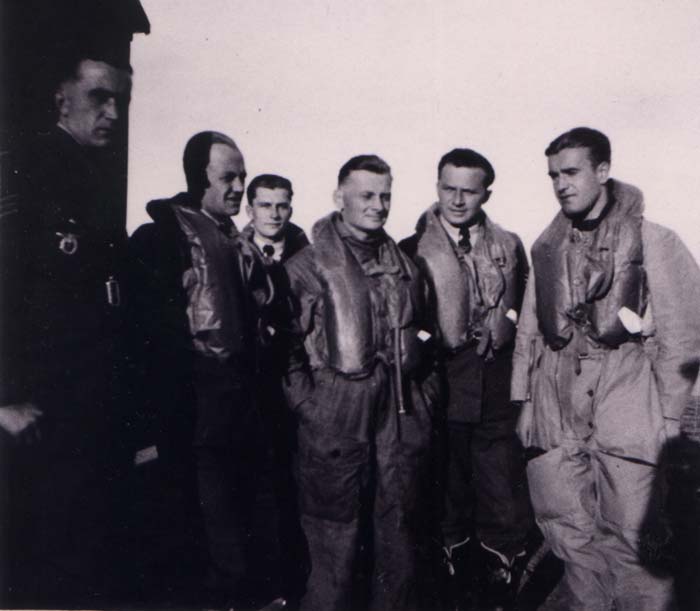 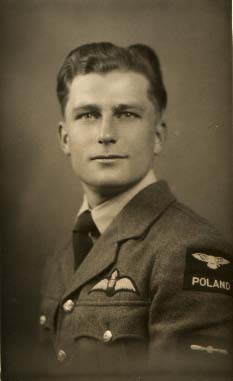 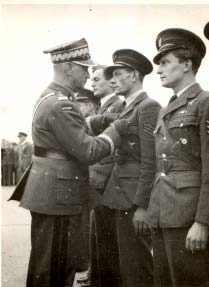 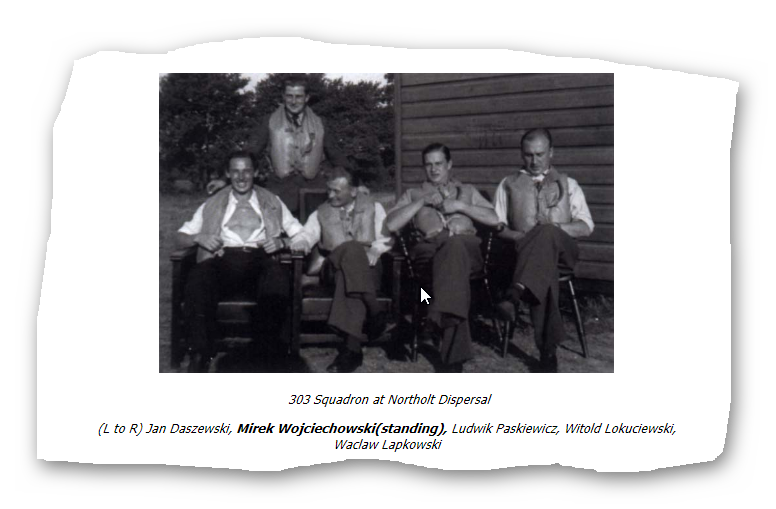 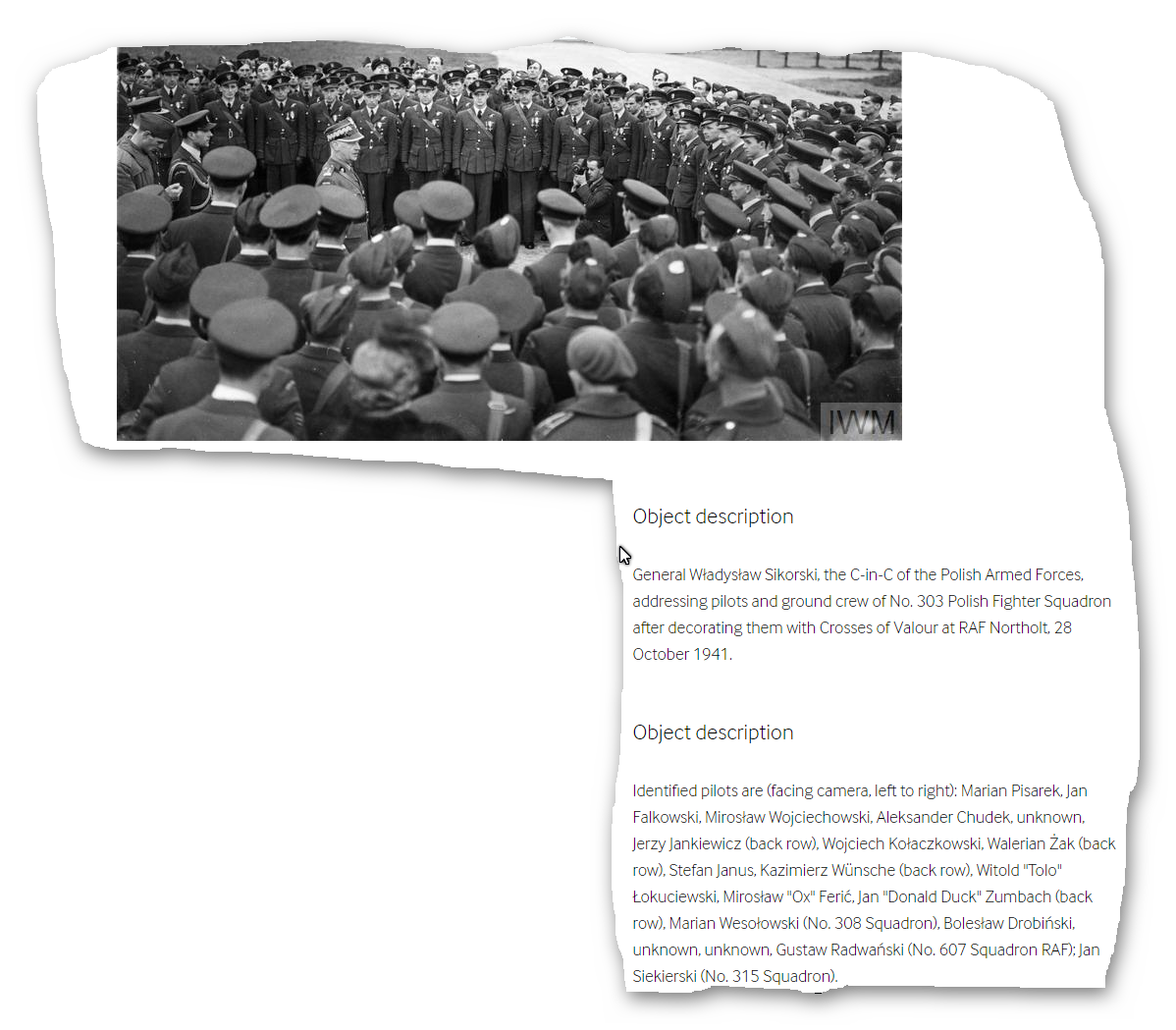 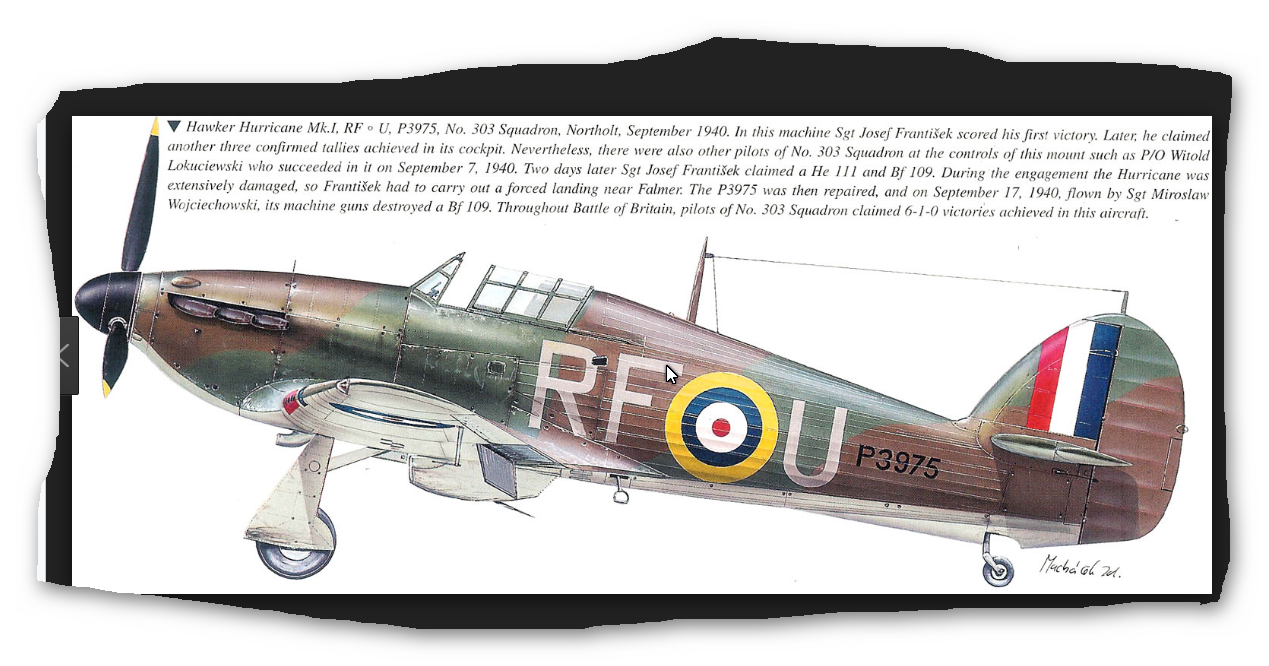 < = expand >
Miroslaw Ignacy Wojciechowski was born on 6th March 1917, in the small village of Zoppot on the shores of the Baltic Sea. He completed his education at Wydzialowa High School at Torun in 1932. Two years later he joined the Polish Air Force, entering the NCO's School at Bydgoszcz and qualifying as a mechanic in 1937.

He was then accepted for flying training in the training squadron of the 4th Air Regiment at Torun and graduated from the Deblin fighter school in 1938. The family home was in Torun, so Mirek was able to say his goodbyes as war broke out. Kaporal Wojciechowski flew with 142 Eskadra in combat until it was ordered to disperse at the end of September 1939.

He entered Roumania on 27th September disguised as a travelling salesman, crossing into the former Yugoslavia at Vrsac on 14th October, entering Greece on the 17th October before finally embarking at Piraeus on 20th October for France, arriving in Marseilles on 28th October. He kicked his heels for a few months, before being transferred to England in February 1940 as a member of the RAF Volunteer Reserve, ending up in Blackpool with many other Polish airmen.

As the Polish squadrons were being raised, he was checked out on various aircraft; his Pilot's Flying Log Book [now kept at the Public Records Office at Kew] shows that between 23rd July 1940 and 11th August he rotated through the Tiger Moth, the Hawker Hector (a Hind variant), the Fairey Battle and finally... the Hurricane Mark I.

Mirek (the diminutive of his name) was discharged from the RAF Volunteer Reserve, rejoined the Polish Air Force on 6th August 1940 and he was assigned to 303 Squadron, 303 Dywizjon Mysliwski Warzawski im. Tadeusza Kosiuszki (303 Warsaw Thaddeus Kosiuszko's Fighter Squadron), on 12th August.

Throughout August 1940, 303 was designated as an airfield defence squadron. On 30th August, Mirek was flying as wingman to Ludwik Paskiewicz on a training exercise led by Sqn Leader Kellet, intercepting six Blenheim bombers. Claiming he was unable to raise Kellet on the R/T, Paskiewicz peeled off, with the rest of the flight, in pursuit of German aircraft.

Paskiewicz was credited with a Dornier Do 17, officially reprimanded and told that he and the squadron was now fully operational.

The 15th of September is widely regarded as the turning point in the Battle of Britain. That morning, Mirek's "B" flight was scrambled at 11.20am, and directed to defend London. A vast German armada had already flown up from the south and no concerted attack seemed possible. It was every man for himself as individual dog fights broke out. The squadron claimed 10 aircraft shot down from the sortie, of which Mirek, as detailed in his Combat Report, had destroyed an Me109E (also known as the Bf109) and shared a Dornier Do 215 with Sgt Andruszkow. The squadron turned for home, to refuel and rearm.

Every Southern Sector Fighter Squadron was being put up to meet the waves of German bombers. At 14.20pm, Mirek's squadron was in the air again, this time sighting 400 bombers approaching over Gravesend. Blue Section of "B" Flight, (Mirek and Walerian Zak led by Squadron Leader Kellet), flew through the huge enemy formation, followed by Urbanowicz leading Red and Yellow Sections. The German aircraft broke formation and yet another series of dogfights took place. Another 5 aircraft were claimed by 303 Squadron, with Mirek's Combat Report detailing how he shot down another Me109E.

During the day, the Luftwaffe launched the largest daytime bombing raids of the war over England. The Luftwaffe lost 56 aircraft against 26 RAF fighters (of which 13 pilots survived). A total of 27, or nearly half, of the total German losses were claimed by Poles, of which 15, as detailed in the Intelligence Report, were claimed by 303 Squadron.

On 17th September, 303 Squadron were patrolling with 1 RCAF Squadron. They saw Me109's over the Thames estuary, but at 27,000ft, they were too hard to catch. Later, Mirek saw a Hurricane being pursued by three Messerschmitts. He flew to engage them at 17,000 ft and shot one down. According to his Combat Report, he "could not follow the aircraft down, as he was engaged with the others". However, Mirek did succeed in starting a fire in the cockpit of the second Me109E but was again "unable to follow him down, as I had another of them on my tail".

According to Robert Gretzyngier, Mirek "probably saved the life of the Hurricane pilot, F/O EC Briese of 1 RCAF who was chased by the Messerschmitts; the oil system of his aircraft suffered damage which prevented him from being able to reach Northolt and he had to force land at High Halstow".

303 was rotated out to Leconfield by the middle of October, having flown 35 combat missions. Mirek had flown 42 operational sorties, more than any other pilot on the squadron.

303 Squadron re-equipped with Spitfires in January 1941. By February the sweeps over occupied France were intensifying. On 25th February, a dozen pilots from 303 Squadron joined Blenheim bombers over Canterbury, to attack targets in northern France. The squadron headed towards Calais, encountering strong anti aircraft fire on the way. Unable to find enemy aircraft willing to engage, they headed back to England, crossing the coast until further intensive AA fire. Mirek felt his Spitfire shudder and saw an Me109 behind him. He also saw the ragged remains of his tail plane. Diving into clouds, he escaped his pursuer, eventually landing back at Northolt with "a completely smashed rudder, both main wheel tyres shot through, five holes in the port wing and one hole in the fuselage".

It was on another routine bomber escort over France on 23rd June 1941 that Mirek in Spitfire P8333/RF-S encountered an Me109F attacking two Spitfires from above and behind. He shouted a warning over the R/T, and according to his Combat Report, the Spitfires turned away. The Me109 followed and Mirek turned in after it. He fired bursts from cannon and machine guns from 400 yards, closing to 100 yards before the enemy aircraft exploded.

On 2nd July 1941 during a routine "Circus" over Lille, he "forgot to check his mirror". He never saw the new Me109F's that "bounced" him. Machine gun bullets and cannon shells ripped through his aircraft. One cannon shell came through the armour behind his cockpit seat, through his shoulder blade and on into the instrument panel. It exploded behind the panel, throwing glass and metal back into his face.

Surprised, shocked and "very angry" with himself, he managed to escape his pursuer and nurse his badly damaged Spitfire back over the channel, landing it without further incident at Martlesham.

According to the squadron Combat Diary "he climbed from a cockpit which was dripping with blood; he collapsed walking to Sick Quarters". He was taken immediately to East Suffolk Hospital in Ipswich where emergency surgery saved him life and his arm.

He spent the next five months recuperating from his wounds, undergoing two further operations to graft skin over the large hole in his shoulder. He returned to active duty with 303 Squadron in December 1941, flying with them until the end of 1942.

Between 1942 and 1945, Mirek moved between 303 and FTS, teaching others to fly. On the 7th November 1942, he was awarded the Virtuti Militari by General Sikorski, commander in chief of all Polish forces. Mirek was moved from the disbanded Polish Air Force to the Polish Resettlement Corps in early 1947 when the British government offered a haven to all Poles in England. The PRC was wound up and, by now a Warrant Officer, he re-engaged as a Master Pilot in the RAF in November 1948.

From 1945 to 1949 there were more postings to flight training and BAT (Blind Approach) schools, where Mirek became one of the most experienced Flight Instructors in the RAF. On 1st January 1950 he was posted to 2 Squadron in Germany. Initially flying Spitfires, the squadron soon converted to the Gloster Meteors.

Current research undertaken by Wojtek Matusiak on 2 Squadron's photo reconnaissance role in Berlin suggests that the high altitude Spitfires, which at that time were well out of reach of Soviet air defences, were engaged in covert surveillance over East Germany and even Poland.


In 1953 Mirek transferred to 247 Squadron, initially on the Meteors that he had converted to on 2 Squadron, but then converting to the new Hawker Hunters. They shared RAF Odiham with the Javelin fighter bombers. He flew for a further 3 years, before his untimely death on 22nd October 1956.

There is this extract from MOD records -

On the night of 22nd October 1956 Warrant Officer Miroslaw Wojciechowski was flying as second pilot on Balliol Mk T2 Serial WG184 of 288 Sqn then based at RAF Middle Wallop. The first pilot was S/Ldr Charles Warren MBE DFC. During dual night circuits and landings and shortly after calling downwind for landing on the second circuit, the aircraft collided with a Chipmunk (operated by Air Services Ltd) between 1500 and 1800ft. The captain, S/Ldr Warren, jettisoned the canopy and baled out, injuring himself on landing. Warrant Officer Wojciechowski was sadly killed when he struck the ground with his parachute only partially opened. It is not known whether he baled out or was thrown from the aircraft on impact with the ground. The Chipmunk pilot, Flying Officer Htay Maung (Burmese Air Force) baled out and was injured on landing.

The Court of Inquiry concluded that the accident had been caused by the divergence of regulations governing civil and military flying, in that the Chipmunk was flying just within the airfield traffic zone. Contributory factors were considered to be the restricted visibility caused by the darkness and the large blind spots caused by the canopy structure of the Balliol.

Mirek was buried with full military honours in the tiny country churchyard at Over Wallop(St Peter) Churchyard. As a serving officer in Her Majesty's forces during the era of the Cold War, he was never able to return to his native Poland.

He was married to Panda Wojciechowska and had a daughter named Jan.