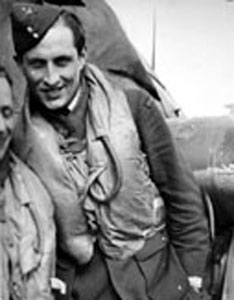 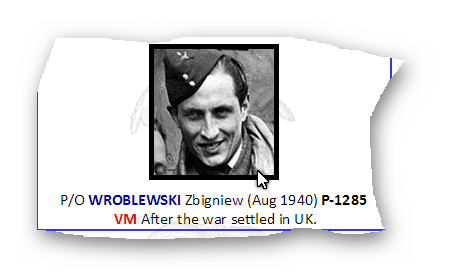 On 1st September 1939 Wroblewski was immediately in action. In an early morning interception of He111's Wroblewski claimed one probably destroyed and returned to base with his own aircraft badly damaged.

He shared in destroying a Me110 on 4th September. After Poland fell the remnants of Wroblewski's squadron flew to Cernauti, Romania on 7th September and the pilots were interned. Wroblewski escaped and boarded a ship at the Black Sea port of Balchik, bound for Malta and Marseilles. He arrived in France in November 1939 and joined l'Armee de l'Air.

He was posted to a Polish unit, Groupe de Chasse I/145. He served throughout the defence of Paris and the fighting in May and June 1940, flying at various times the MS406, C714 and Bloch 152.

When the French collapsed Wroblewski made his way to La Rochelle and sailed for England on 19th June, arriving two days later. He went to the Polish Wing at 3 School of Technical Training Blackpool to await a posting.

He joined 302 Squadron at Leconfleld on 23rd August, was attached to 5 OTU Aston Down on 2nd September and after converting to Hurricanes rejoined the squadron on the 26th. He was commissioned in March 1941.

On 20th December Wroblewski joined 602 Squadron at Matlask and before the end of the war he carried out 58 operational sorties, mostly bomber-escorts and attacks on V2 sites. On 9th June 1945 Wroblewski was posted to RAF Coltishall as Station Adjutant.

He was released from the Polish Air Force in December 1945 as a Flight Lieutenant and was awarded a third Bar to the KW (gazetted 31st October 1947).

In 1953 Wroblewski went into civil aviation. He became a captain for a British airline and for the last eleven years of his career he flew with Nigeria Airways in Lagos.

After retiring in 1980 Wroblewski returned to England to live.

Wroblewski death was registered in May 1995 at Hove Sussex.