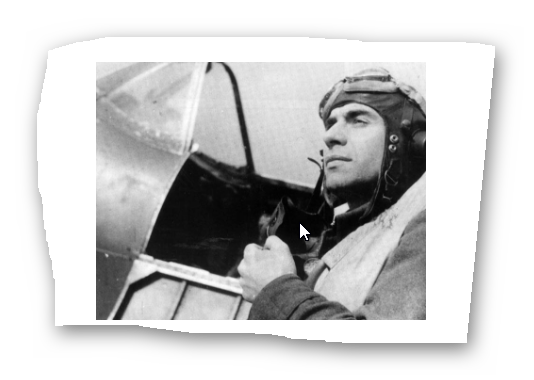 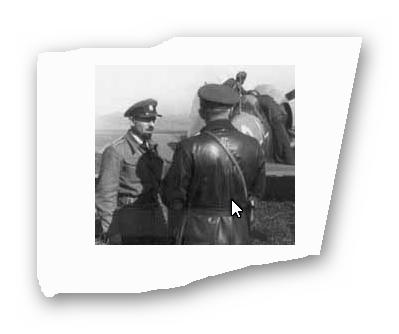 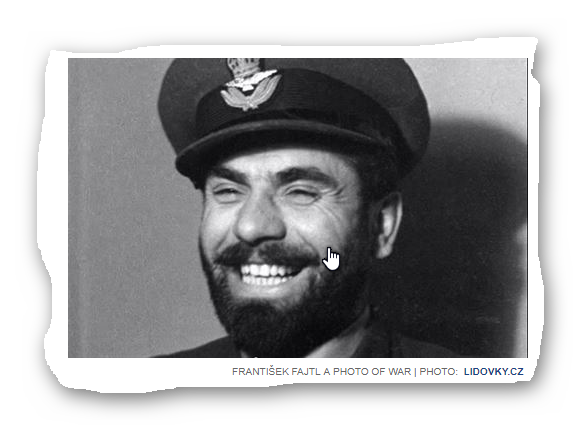 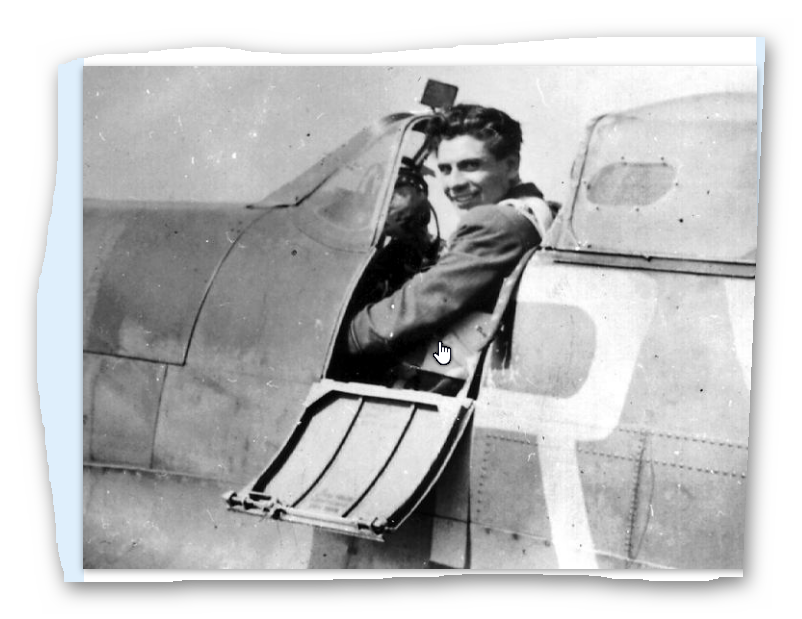 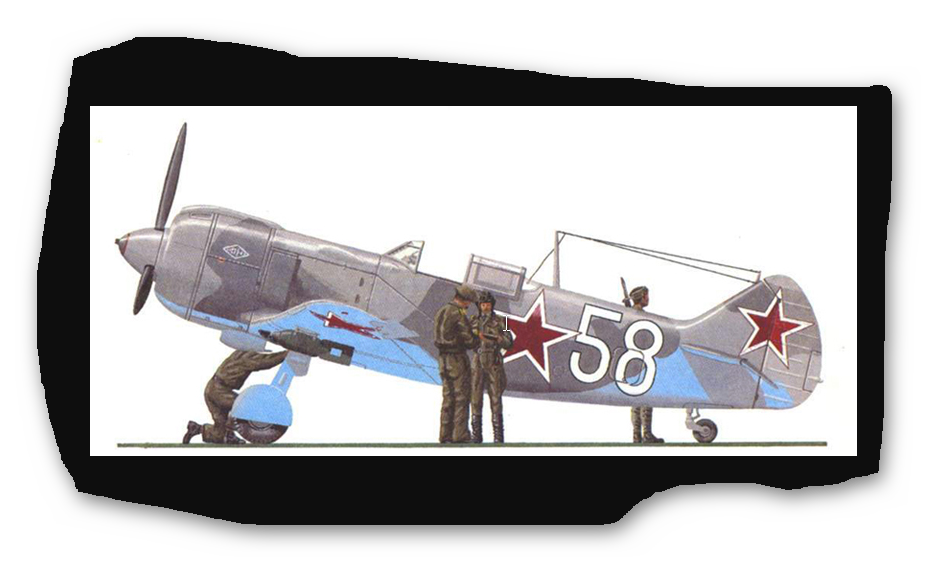 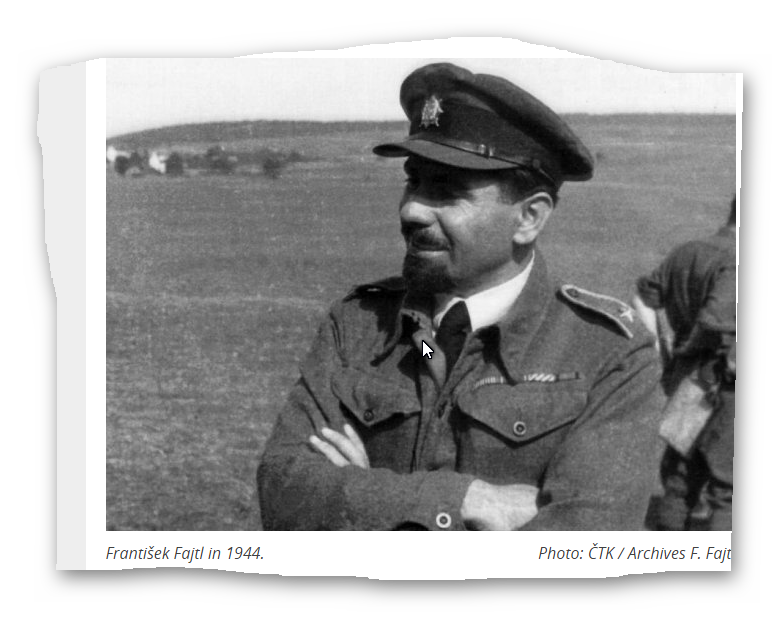 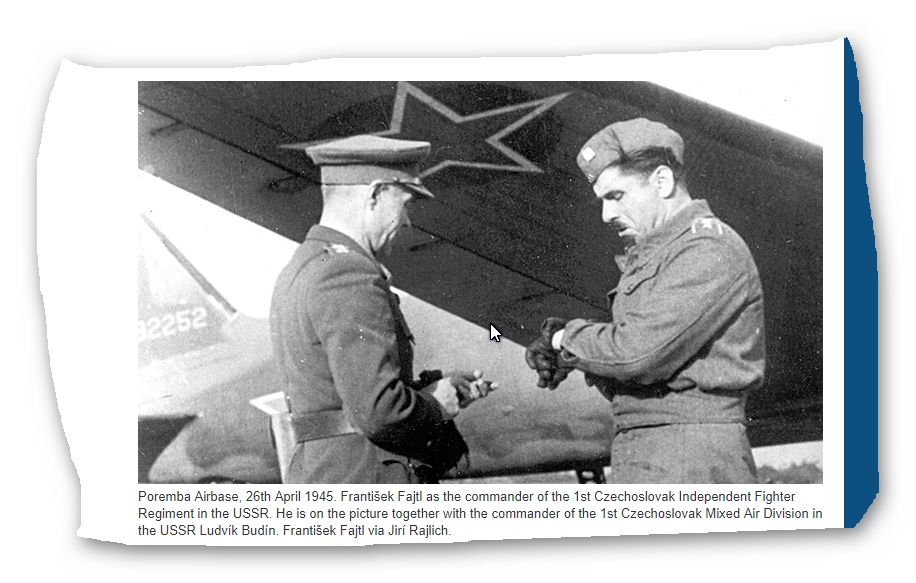 < = expand >
Frantisek Fajtl was born on 20th August 1912 at Donin in the province of Lounsk, Czechoslovakia. After his public school education he enrolled in a business college in Teplice, graduating on 24th July 1932. He then visited the Netherlands, Italy, Germany, and Great Britain. He had a flair for languages and was fluent in German and English and nearly so in Russian and French. Fajtl then returned to two years in a military academy, being commissioned as a Lieutenant-Pilot in 1935. He was serving in the Czech Air Force when the Germans occupied Czechoslovakia in March 1939. With other pilots he escaped through Poland to France and joined the French Foreign Legion, the only option for non-French citizens.

After the outbreak of war Czech and Polish pilots were allowed to join the Armee de l’Air, Fajtl serving with GC III/7 and GC III/9. After the French collapse, Fajtl escaped through Port Vendres to Oran and from there to Gibraltar and by ship to Liverpool.

He initially joined 310 Squadron at Duxford on 6th August 1940 but after ten days was sent to 6 OTU Sutton Bridge to convert to Hurricanes. On 12th September Fajtl joined 1 Squadron at Northolt and then moved to 17 Squadron at Debden on the 25th. He shared in the destruction of a Do 17 on 2nd October and a Do215 on the 24th.

Fajtl was posted to 313 (Czech) Squadron at Catterick on 25th May 1941 and served with it until 27th March 1942 when he took command of 122 Squadron at Hornchurch. During a bomber escort to Lille on 5th May 1942 he was shot down by Fw190’s of JG26, crash-landing near Hazebrouck in Spitfire Vb BM210 near Hazebrouck.

He evaded capture and was able in eight days to reach Paris and find a Czech family that he knew from his pre-war visit. He recuperated there for two weeks and then passed into the Unoccupied Zone and over the Pyrenees. Arrested by Spanish police, he spent some months in jails and camps before being released thanks to the British Consul in Madrid. Taken to Gibraltar, he returned to England by a Hudson courier aircraft.

On 30th August 1942 he was sent to the RAF Hospital Torquay to convalesce, the following month he was made a member of the Inspectorate of the Czech Air Force and attached to HQ 11 Group as Liaison Officer. He moved to HQ 10 Group on 2nd October and remained there until 15th May 1943, when he went on a month's attachment to HQ Fighter Command on liaison duties.

He volunteered for service in Russia and in February 1944 went there, taking twenty-one Czech pilots with him. Fajtl formed and commanded a Czech squadron which operated in the Carpathians and Slovakia with the Russian Air Force, flying Lavochkin aircraft.

Post-war he graduated from the Czech War Academy and became the deputy commander of the 1st Air Force Division. In February 1948, following the communist putsch, he was declared politically untrustworthy and dismissed from the air force.

Unwilling to leave Czechoslovakia now he had a wife and daughter, he took the menial jobs allowed him. In January 1950 he was arrested by the secret police and put into a forced labour camp for sixteen months. On release he worked as a book-keeper until 1964, when he was partially rehabilitated by the state. He then was given a position in the state inspectorate of aviation accidents.

With the collapse of communism in 1989 Fajtl was reinvested with the air force rank of Major General, twelve years later he was made Lieutenant General.

Fajtl held Czech, French, British, Soviet, Romanian and Yugoslavian decorations. In 2004 he was awarded the Order of the White Lion for Victory by the Czech Republic.

The death of the last Czech Battle of Britain veteran, Frantisek Fajtl, was marked by a short service at the monument on 12th October 2006. Czechoslovakia has of course since separated into the Czech and Slovak Republics and officials of both embassies and armed forces were present. The press release of the Embassy of the Czech Republic follows:

Remembering Lt.Gen Fajtl, Ambassador Winkler said: “We should never forget Lt.Gen Fajtl and all the other Czechoslovak servicemen who fought in Battle of Britain together with those of the other nations. Though we can never pay in full the huge debt of gratitude we owe them, we should always remember their valour and sacrifice that played such a crucial role in saving Europe from the terrible fate it was facing.

At the ceremony, Ambassador Winkler was joined by Under-Secretary of State for Defence and Minister for Veterans Derek Twigg, Maj.Gen Ivan Schwarz, Chairman of the Free Czechoslovak Air Force Association, and Lord Tebbit, President of the Battle of Britain London Monument Appeal.
František Fajtl was born on 20th August 1912 in what was then the Austro-Hungarian Empire. In 1935 he graduated from Military Academy in Hranice and joined the Czechoslovak Air Force. He left Czechoslovakia in June 1939 and travelled to France where he was accepted in the ranks of Foreign Legion. He moved to the UK via North Africa and in August 1940 entered the RAF as Flying Officer. He took part in a number of operations both in the air and on the ground. During the Battle of Britain he shot down four enemy aircraft. Fulfilling various duties he remained in the service of the RAF until 1944. After WW2 he travelled back to Czechoslovakia and rejoined the Czechoslovak Air Force. In 1949 he was forced to leave the service and was later arrested, imprisoned and degraded by the Communist regime. In the 50’s and early 60’s he had to work in unskilled jobs before a partial rehabilitation in 1964. Since then he worked as aviation inspector and wrote a number of books. In 1990 František Fajtl was appointed Lieutenant General and fully rehabilitated.

Aged 94 Lt.Gen František Fajtl died in Prague on 4th October. His funeral with all due military honours took place in Prague on 13th October 2006.