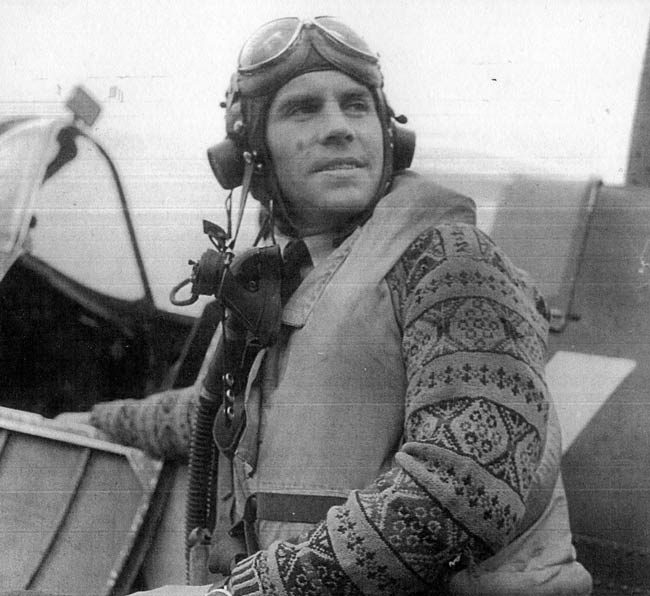 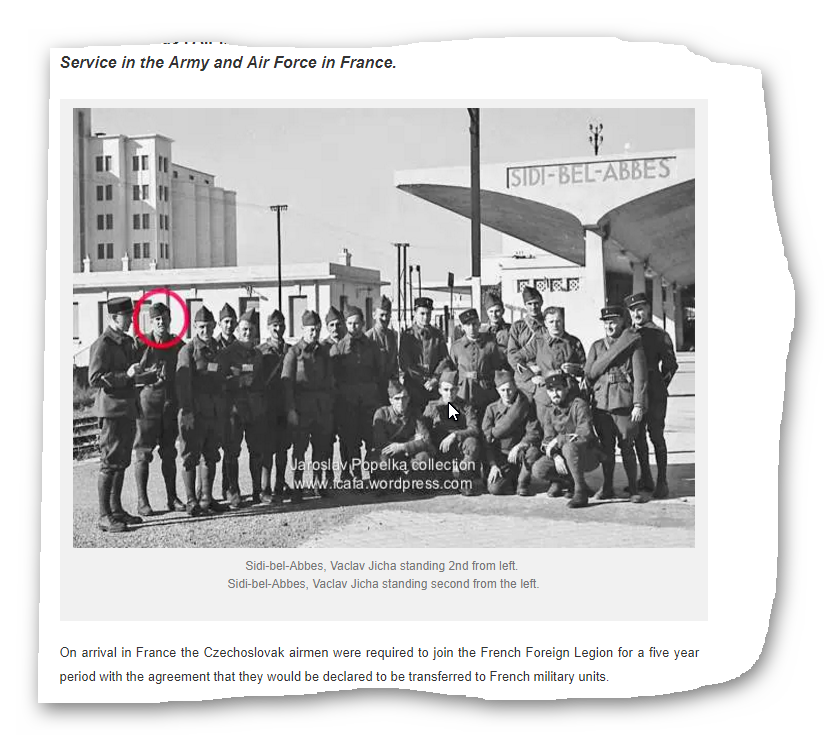 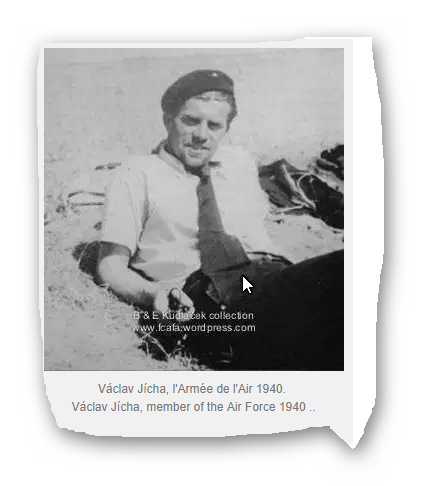 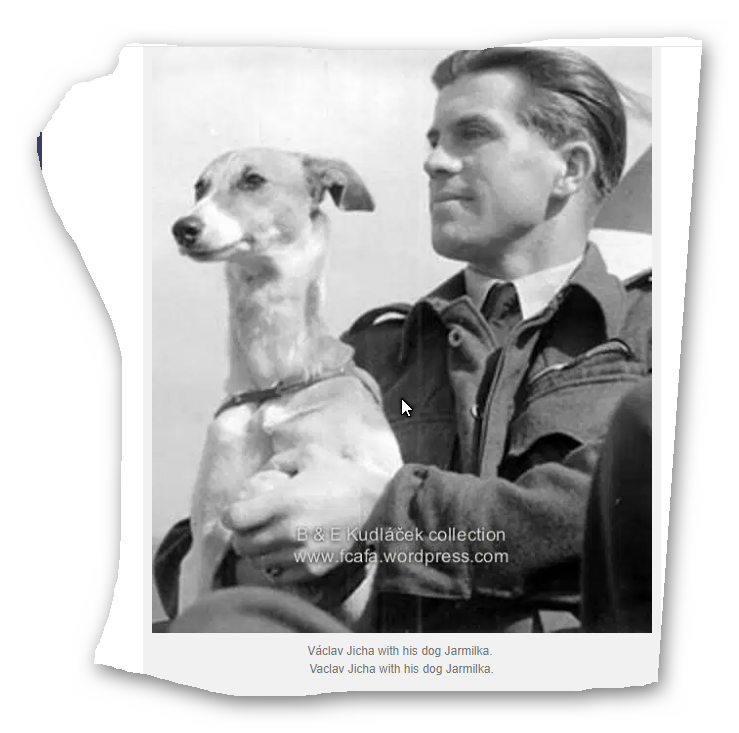 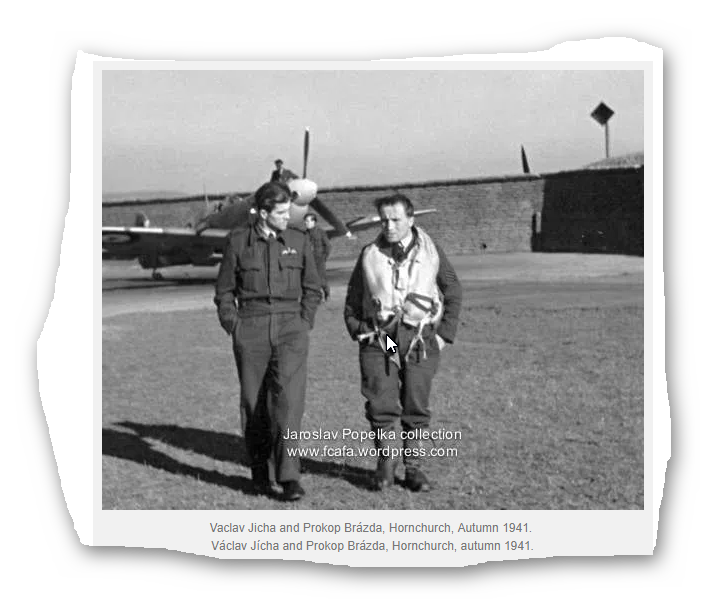 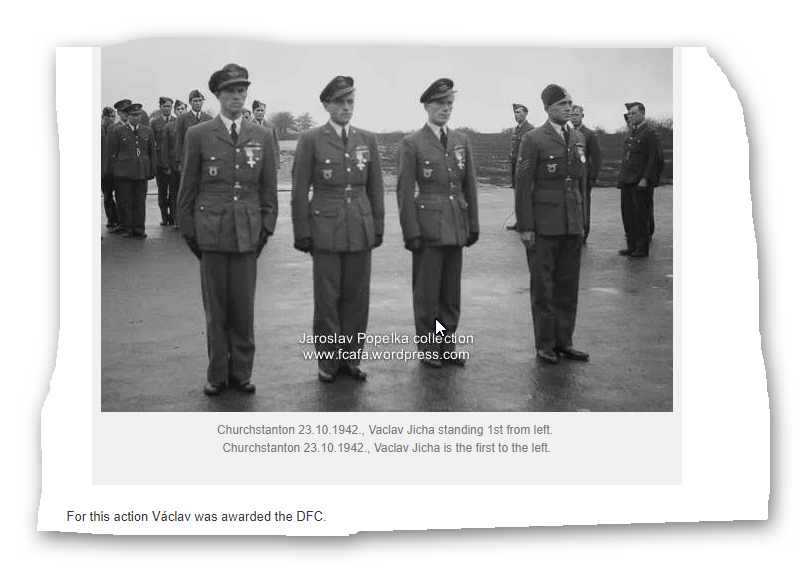 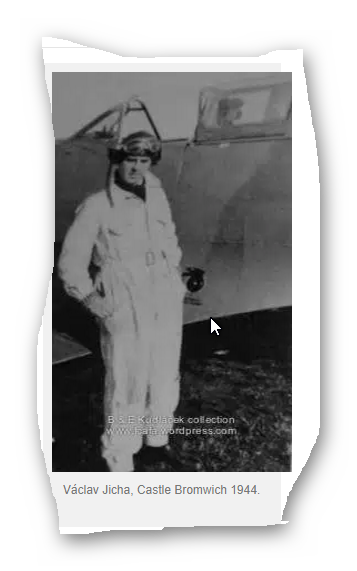 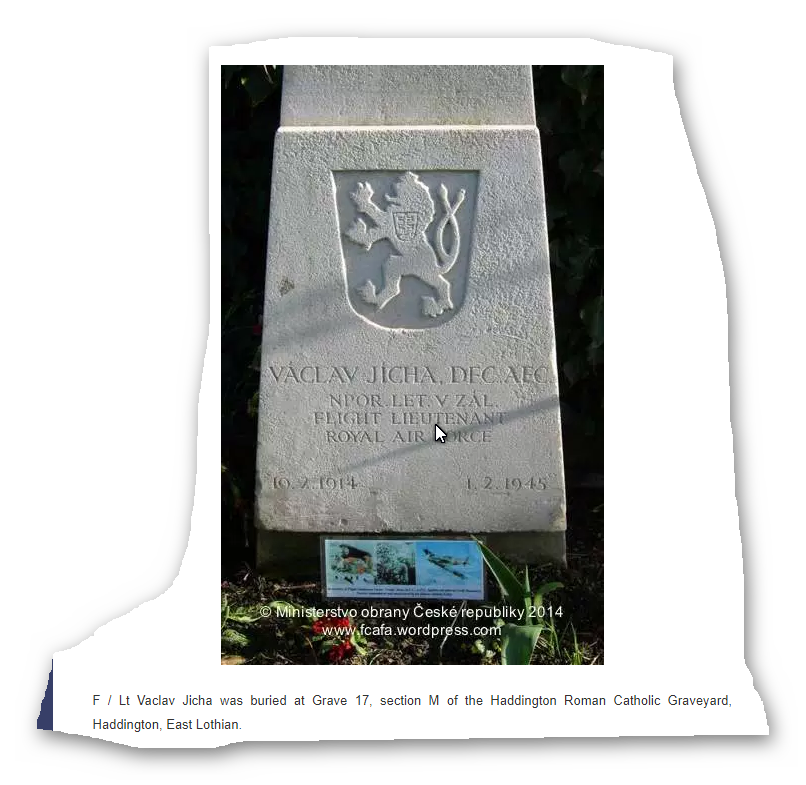 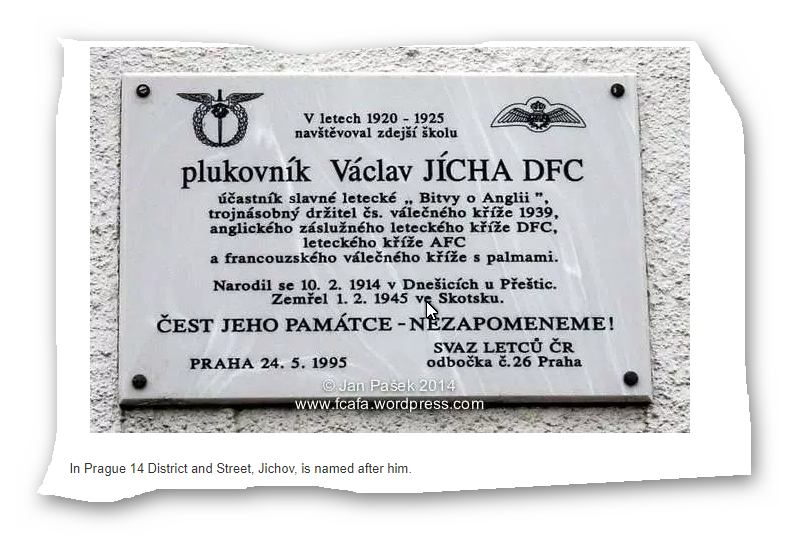 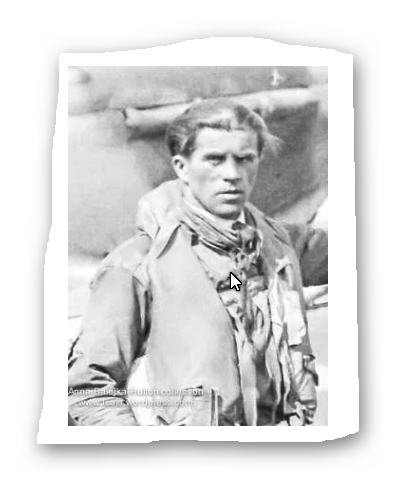 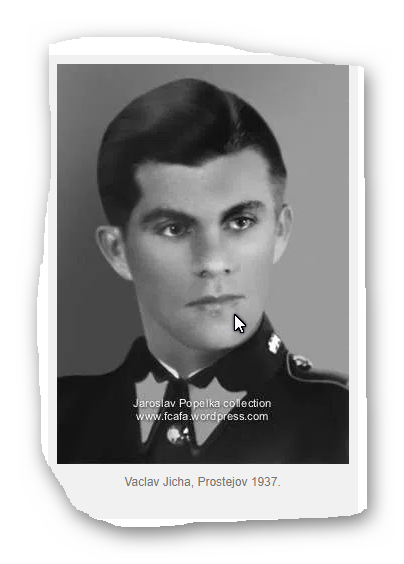 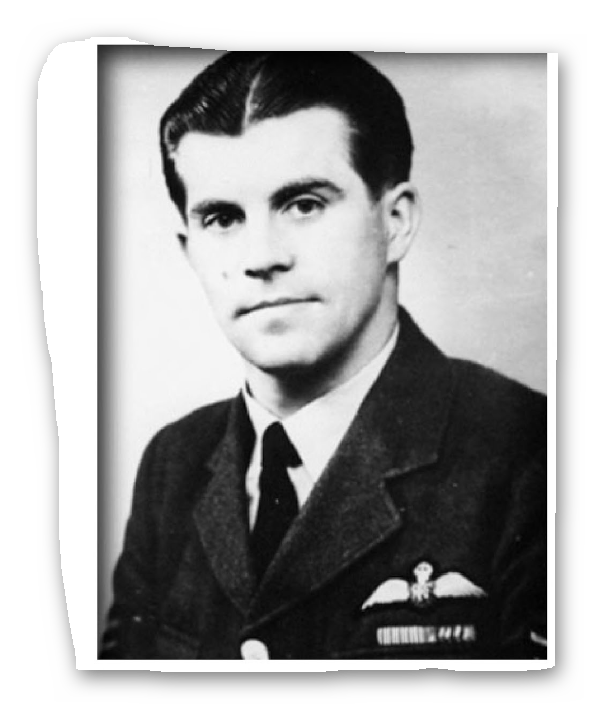 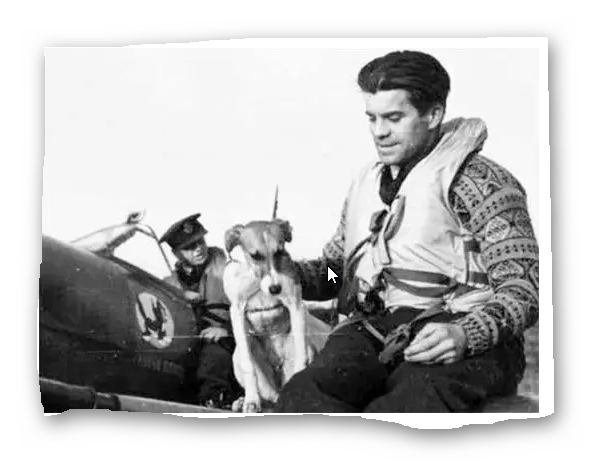 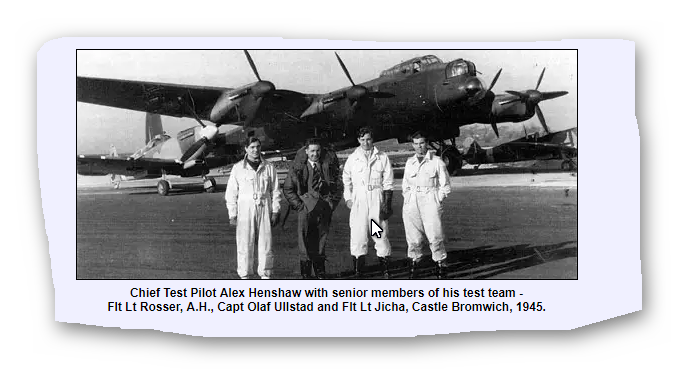 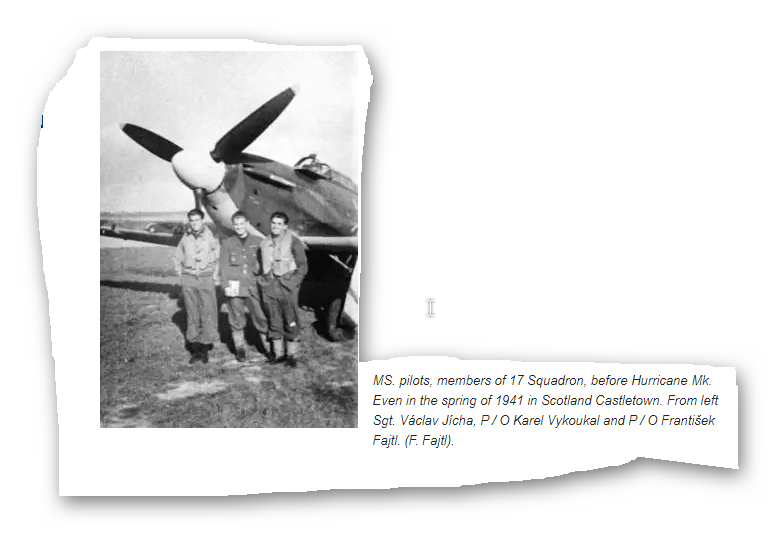 < = expand >
Vaclav Jicha was born on 10th February 1914 at Dnesice, south of Pilsen, Czechoslovakia. After finishing his secondary education he enrolled in a technical college, specialising in electromechanics, graduating on 30th April 1929.

Already interested in flying, he worked as a mechanic at a flying club at Letnany and took flying lessons, gaining his licence in 1933. In October 1935 he was conscripted into the army but was diverted from infantry training to a flight mechanics school and later selected for pilot training, passing out on 31st March 1937.

His first posting was to 43 Squadron of the 1st Fighter Regiment at Kbely. His compulsory military service period ended on 30th September 1937 and Jicha elected to remain as a career NCO. He was selected for the nine-strong Air Force aerobatic team, operating the Avia B122 biplane, and was also one of a three-strong demonstration team.

After the German occupation in March 1939 Jicha, like many Czech airmen, planned to leave the country and on 13th May arrived in Poland. Offered a choice of staying or attempting to join the French Air Force, Jicha chose the latter and sailed from Gdynia on the ms Batory on 22nd May.

He arrived at Cherbourg four days later. On 14th June he was enrolled, as were all foreign airmen at that time, into the French Foreign Legion and he sailed from Marseille for the Legion training camp at Sidi-bel-Abbes in Algeria.

On 3rd September 1939 France declared war on Germany and Jicha was transferred to the air force and started training on the MS406 at Oran.

On 13th December Jicha was posted to Groupe de Chasse I/6, operating from Chiessy, close to the Swiss border.

Unable to fulfil their role of intercepting high-flying Dornier Do17P reconnaissance aircraft (as the MS406 could not reach their altitude) they were diverted to the ground-attack role and suffered heavy losses.

The squadron retreated southwards and was disbanded on 19th June at Bergerac, Jicha and many other airmen made their way to Port Vendres near the Spanish border.

He sailed to Oran on 24th June on the General Chanza, went by train to Casablanca and boarded the Gibel Dersa which arrived at Gibraltar on 30th June. He then boarded the Neuralia which landed him at Liverpool on 12th July.

Jicha was processed into the RAF as a Sergeant and posted to 310 (Czech) Squadron at Duxford on 6th August. After assessment he was sent to 6 OTU Sutton Bridge on 17th August to convert to Hurricanes, but instead of returning to 310 he joined 238 Squadron on 11th September.

He moved to No. 1 Squadron at Wittering in late September. He shared in the destruction of a Do17 on 29th October and a Ju88 on the 30th. Jicha moved to 17 Squadron at Martlesham Heath on 17th November 1940.

Jicha was posted to 45 MU Castle Bromwich in early 1943 as a test pilot on new production aircraft. In the period ending in May 1944 he had flown 822 hours on test duties, experiencing a high proportion of engine failures. Out of fifteen forced-landings, he successfully landed nine aircraft intact, with undercarriages down, on the airfield.

In January 1945 Jicha was posted away from 45 MU and on 1st February he was being flown from Castle Bromwich to Kinloss as a passenger in Anson NK945.

The pilot failed to check the weather and flew into a snowstorm. He turned back and crashed on the crest of Turf Law, near Soutra Hill. The Anson broke up and slid down a ravine and the wreckage was not discovered until 7th February by a shepherd. Jicha, Flt Lt. RC Ferguson and Fg Off AS Davidson were found dead but there is a possibility that Jicha survived the crash but later froze to death.
Jicha was awarded the AFC (gazetted 28th November 1945) for his work at Castle Bromwich, which was often carried out in hazardous weather conditions, particularly in winter.