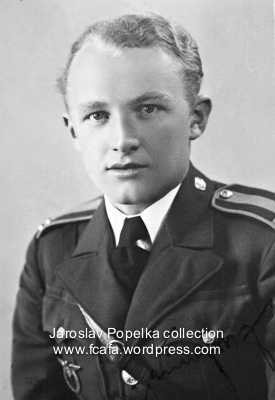 Sent at first to the Foreign Legion at Sidi-bel-Abbes in Algeria, he was inducted into l'Armee de l'Air and sent for training at the flying school at Chartres. He qualified on the MS406 and was posted on 17th May 1940 to GCII/2 at Chissey-sur-Loue near Dijon. He shared in destroying a Ju88 on 15th June 1940.

He was demobilised on 21st June 1940 and made his way to England.

Kopriva enlisted in the RAFVR at No. 1 RAF Depot, Uxbridge and from there he joined 310 Squadron at Duxford on 13th July 1940.

He was shot down during combat with Me110's on 3rd September in Hurricane P8811/NN-F. He baled out with burns to his face. The aircraft crashed at Rookes Farm, west of Chelmsford. He was admitted to hospital and did not rejoin 310 until 30th September 1940.

His next operational sortie was on 26th October.

On 13th December 1940 he was transferred to 19 Squadron, operating Spitfires, before going on 16th June 1941 to 54 OTU Church Fenton to convert to Beaufighters.

On 12th August Kopriva was commissioned and teamed with Sgt. J Kovanda, they were posted to 255 Squadron at Hibaldstow. They were then both posted to 68 Squadron, operating the Beaufighter in the night-fighter role, on 15th September 1941.

In June 1942 Kopriva transferred to the Czechoslovak Inspectorate General of London, remaining non-operational till the end of the war.

Kopriva was released from the RAF as a Flight Lieutenant.

He returned to Czechoslovakia but, like many ex-RAF Czechs, he was purged by the communist authorities in 1948 and returned to England.