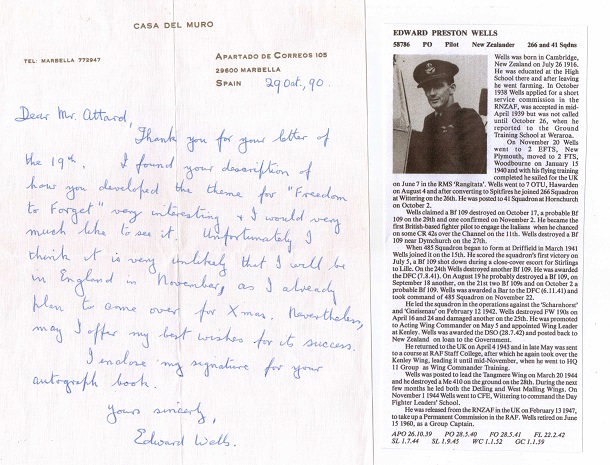 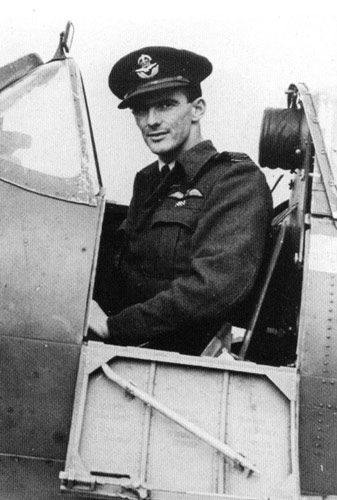 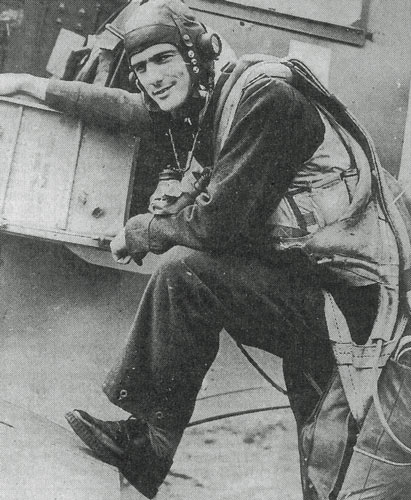 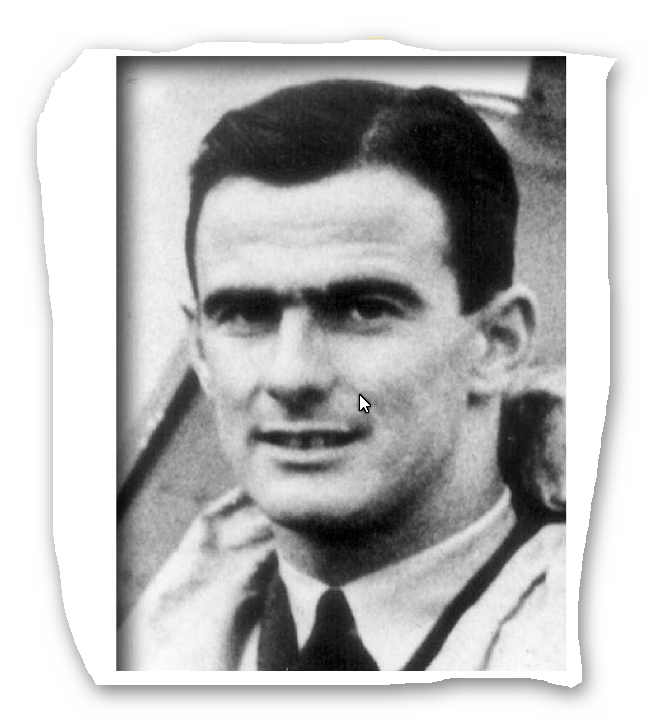 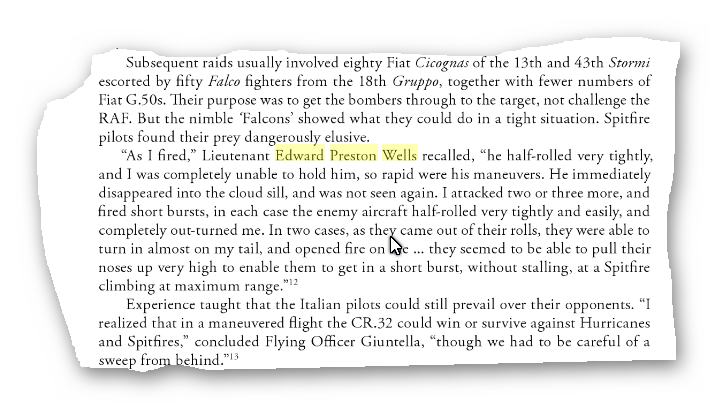 < = expand >
Edward Preston Wells was born in Cambridge, New Zealand on 26th July 1916. He was educated at the High School there and after leaving, he went farming. In October 1938 Wells applied for a short service commission in the RNZAF.

He was provisionally accepted in mid-April 1939 but was not called forward until 26th October when he reported to the Ground Training School at Weraroa.

On 20th November Wells went to 2 EFTS New Plymouth before moving to 2 FTS Woodbourne on 15th January 1940. After completing his flying training he sailed for the UK on 7th June in the RMS Rangitata.

Wells had been a champion 12-bore shot during his school days in New Zealand, and his outstanding marksmanship earned him the nickname 'Hawkeye'.

On arrival Wells went to No. 1 RAF Depot Uxbridge to await a posting. He went to 7 OTU Hawarden on 4th August and after converting to Spitfires joined 266 Squadron at Wittering on the 26th. He was posted to 41 Squadron at Hornchurch on 2nd October.

Wells claimed a Me109 destroyed on 17th October, he probably destroyed a Me109 and damaged another on the 25th and he destroyed a Me109 on 2nd November. He became the first British-based fighter pilot to engage the Italians, when he chanced on some CR42's over the Channel on the 11th.

When 485 Squadron began to form at Driffield in March 1941 Wells joined it on the 15th. He scored the squadron's first victory on 5th July, a Me109 shot down during a close-cover escort for Stirlings to Lille. On the 24th Wells destroyed another Me109.

Wells was awarded a Bar to the DFC (gazetted 6th November 1941).

He took command of 485 Squadron on 22nd November.

He led the squadron in the operations against the Scharnhorst and Gneisenau on 12th February 1942. Wells destroyed a Fw190 on 24th April and damaged another on the 25th. He was promoted to Acting Wing Commander on 5th May and appointed Wing Leader at Kenley. On 24th May he damaged a Me109 and on 20th June he destroyed a Fw190.

Wells was awarded the DSO (gazetted 28th July 1942) and posted back to New Zealand, on loan to the Government.

He returned to the UK on 4th April 1943 and in late May was sent for a course at RAF Staff College, after which he again took over the Kenley Wing, leading it until mid-November, when he went to HQ 11 Group, as Wing Commander Training.

Wells was posted to lead the Tangmere Wing on 20th March 1944 and he destroyed a Me410 on the ground on the 28th. During the next few months he led both the Detling and West Malling Wings. On 1st November 1944 Wells went to CFE Wittering to command the Day Fighter Leaders School.

He was released from the RNZAF in the UK on 13th February 1947 to take up a permanent commission in the RAF.

In 1954 he took command of the air defence radar station at Bawdsey, on the Suffolk coast, where he was able to indulge his love of wild fowling. After serving with the Joint Planning Staff he retired from the RAF as a group captain in June 1960.

After a spell farming near Woodbridge, in 1975 Wells moved to Spain. He travelled around the world gathering species of sub-tropical fruits, many of which he grew commercially. He received many awards from the Spanish authorities for his fruit-growing and for his studies into fruit diseases.

From his boyhood in New Zealand, Wells had been deeply attached to the countryside. As well as being a fine shot, he was an expert fly-fisherman and could recognise any bird by sight or by its call.

In September 1943 he married Mary D de Booy at Marylebone London, who three years earlier, aged 17, had escaped in a fishing boat with her parents and sister from Nazi-occupied Holland, landing on the east coast with no belongings. She passed away in 2001 and was survived by her husband,daughter and son.

The de Booy family soon became involved with the Red Cross, and the two sisters were in demand for tea dances in London held for Commonwealth members of the RAF. When an invitation was received by his squadron, Wells was detailed by his commanding officer to attend, thus meeting his future wife.

DISTINGUISHED FLYING CROSS (DFC)
Rank: Acting Flight Lieutenant
Unit: No. 485 (RNZAF) Squadron, Royal Air Force
Awarded on: August 29th, 1941
Action: Citation:
"This officer has served with fighter squadrons since May, 1940, and has taken part in many engagements against the enemy. He has destroyed at least five of their aircraft and has damaged others. He has at all times shown the greatest courage and determination."

DISTINGUISHED FLYING CROSS (DFC)
Rank: Acting Flight Lieutenant
Unit: No. 485 (RNZAF) Squadron, Royal Air Force
Awarded on: November 11th, 1941
Action: Citation:
"This officer has completed 46 operational sorties over enemy territory He is a splendid leader and a most determined and skilful fighter pilot whose keenness in action sets a splendid example Flight Lieutenant Wells has definitely destroyed 13, probably destroyed 5 and damaged a further 8 hostile aircraft."
Details: Second DFC awarded as a bar for on the ribbon of the first DFC.

DISTINGUISHED SERVICE ORDER (DSO)
Rank: Acting Wing Commander
Awarded on: August 7th, 1942
Action: citation:
"This officer has completed many operational sorties. He has destroyed 11, probably destroyed 3 and damaged many more hostile aircraft. His
courage, skill and initiative have proved a source of inspiration to his colleagues and his fine leadership has contributed materially to the many successes achieved by the wing."