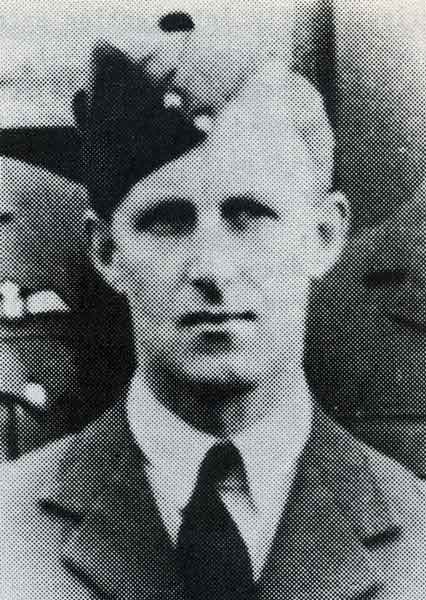 < = expand >
Ronald Alexander Thomson was born in Gore, New Zealand on 11th August 1910, the son of a chemist. After leaving the High School there he entered his father's business.

In early 1936 he won a flying scholarship, sponsored by a newspaper, the prize for which was training to solo standard followed by some further flying. With four hours dual and thirteen hours total, Thomson decided to go to England to apply for an RAF short service commission. He was already above the qualifying age and at that time the New Zealand scheme for processing candidates had not started.

In July 1936 Thomson sailed from Bluff to Sydney and then travelled steerage from there to the UK. On arrival he went to the Air Ministry, applied and was provisionally accepted. He began his training at 11 E&RFTS Perth on 16th November 1936 and was posted to 11 FTS Wittering on 8th February 1937. He completed his training in early September and joined 72 Squadron at Church Fenton on the 4th.

Thomson was still with the squadron in June 1940. On the 26th he destroyed a Ju88 caught in searchlights, one of the few night victories gained in a Spitfire.

On 1st September Thomson was flying one of twelve Spitfires despatched from Croydon to intercept enemy aircraft. The squadron was surprised by Me109's and Thomson's aircraft Spitfire P9448 was severely damaged by cannon fire and he was wounded in the chest, lungs, stomach, hands and one leg by shell splinters. With a dead engine he glided down for a belly-landing near Leeds Castle. He selected an ideal-looking field but on his final approach saw anti-invasion steel hawsers stretched across it. With no choice he flew under the hawsers at 120mph and lost speed by lowering the Spitfire's nose into the ground to come to a halt before hitting tall trees at the far end of the field. His aircraft skidded to a stop, its fin and rudder sliced off. Thomson climbed out and was taken to Leeds Castle military hospital.

He rejoined 72 at Biggin Hill on 11th October.

In early 1941 Thomson was posted to 2 CFS Cranwell for an instructor's course. He qualified as an A2 Elementary Instructor and went to 7 EFTS Desford in June 1941 to instruct on Tiger Moths. Thomson went to ECFS Hullavington in November 1942 for a Senior Instructor's Course and in March 1943 he was appointed CFI at 11(P)AFU Condover, a pre-conversion unit doing day and night flying in Oxfords.

On 20th November 1943 Thomson went to Canada as a CFI. After the Empire Air Training Scheme began to run down he returned to England, arriving on 4th June 1944. He was posted to the Aircrew Officers Training School at Hereford to instruct on ground subjects.

Thomson transferred to the RNZAF in 1945 and sailed for New Zealand with his family in June 1946. After a long spell on the sick list, he was released in June 1947 as a Squadron Leader.

He subsequently worked in the vehicle tyre industry, retiring in 1975.

They had 2 children Ralph Alexander Thomson and Valerie Joan Thomson.