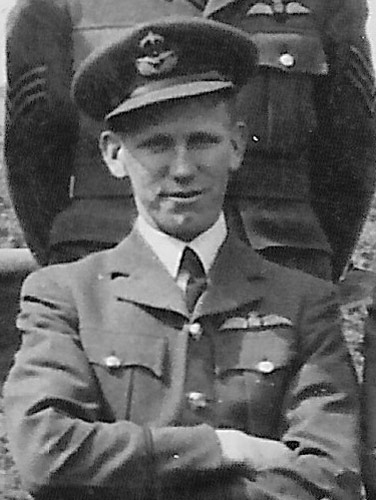 < = expand >
John Noble Mackenzie was born at Goodwood, Otago, New Zealand on 11th August 1914, the grandson of a former Prime Minister of New Zealand. He was educated at Timaru and Otago Boys High Schools. After graduating he went into farming in partnership with his father.

In April 1937 Mackenzie applied for an RAF short service commission and after provisional acceptance he sailed for the UK on 23rd October in the RMS Remuera. He began his initial training at 7 E&RFTS Desford on 16th December and was posted to 9 FTS Hullavington on 5th March 1938.

Mackenzie joined 41 Squadron at Catterick on 6th September. He was still with the squadron at the start of the Battle of Britain. On 29th July Mackenzie's Hurricane, N3112, was badly damaged by Me109's over Dover. He could not bale out because his hood was jammed but he evaded the enemy fighters and made a forced-landing at Ringwould, near Deal.

On 16th January 1941 Mackenzie was made a Flight Commander. He was decorated by the King in March and posted away in April to be a Fighter Controller at Catterick. During his time with 41, Mackenzie had flown 245 operational sorties.

On 3rd September 1941 Mackenzie was posted to Singapore to join 488 (NZ) Squadron as a Flight Commander. The squadron was formed in New Zealand and received its Buffalos at Kallang when it arrived in November. It was not fully operational when the Japanese attacked and fought its first action on 12th January 1942, suffering heavy losses then and during the next few days.

Nine Hurricanes arrived on the 25th to reinforce the badly-depleted squadron but Japanese bombing of Kallang airfield made it almost impossible to continue operations. The remaining aircraft were evacuated to Sumatra on 31st January but by 23rd February 1942 it was all over and most of the pilots, Mackenzie among them, sailed in the Deucalion for Fremantle. Six pilots remained behind to strengthen 605 Squadron.

Mackenzie arrived in New Zealand in April and was given command of 14 (RNZAF) Squadron, then forming at Ohakea. In August 1942 he was made CO of the Fighter OCU at Ohakea. He returned to the UK in June 1943. After a course at COS Sutton Bridge, Mackenzie was posted to 61 OTU Rednal as OC Bombing and Gunnery Squadron.

In April 1944 he took command of 64 Squadron at Deanland. He was now officially in the RNZAF and inSeptember 1944 was posted away from 64 and repatriated to New Zealand.

hi mid-February 1945 he did a Corsair conversion course but it was decided that the RNZAF would not move north of the Solomons and the squadrons were withdrawn.

Mackenzie was then posted to the Fighter Leaders School at Ohakea on 5th March. In August he left the RNZAF at his own request, in early 1946 returned to the UK and in July was granted an Extended Service Commission in the RAF. This became a Permanent Commission in 1948.

Mackenzie retired on 18th December 1957 as a Squadron Leader and returned to New Zealand.