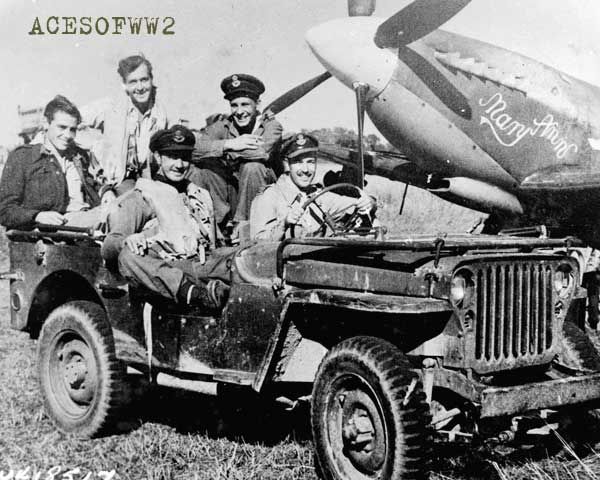 " here is the photo and other guys from 67 squadron(Dad at back, elevated) with some info from the Canadian source, if you follow the link to Canadians in Burma extracts you will note Dave Bockus info which mentions him bailing out into shark infested waters, my Dad also noted this - he was a lone spitfire with him and kept circling him while he called for help - Bockus after the war had said that he saved his life .

I will try and get some more war photos and info(my Mum has his log books) and send on.Thanks for your help. I have no info of his time at RAF Llanbedr post war 1945/46."

editor's note 1: we have David Bockus on this site as well, and, readers may be very interested to read the full article and interview with him provided by RCAF magazine on his various escapes, operations, and, a reference to the bale out in shark infested waters. That link is to the right in the links section.

editor's note 2: will replace some of the above text when Richard fills in some of the details. Richard, thanks, look forward to recording some of the aircraft serials on his page.

From wikipedia ... note on 67 squadron conversion to Spitfires:

"The inadequacy of the Buffaloes led to their replacement with Hawker Hurricanes in February 1942,[2] but the Japanese offensive could not be halted and by March 1942 the squadron "ceased to be effective".[2] The squadron re-assembled at Alipore and formed part of the defence of Calcutta, converting to Spitfires in February 1944. The squadron disbanded officially on 23 August 1945 at Akyab, but kept its aircraft till the end of the month."

67 Squadron Pilots - and pic (above) credit

Photo and initial note sent by son Richard Owen, photo (of father in Jeep) I noticed after posting the image, is from acesofww2 site (great site) and credit given here. Richard indicated he will be in touch with other photos, details.
reply
by: John Engelsted Contact 2018-01-05 20:39:59

Hi Richard. Please contact me at john.engelsted@gmail.com. I would love to hear more about your father's flying and I might have info about 67 Squadron.
reply
post