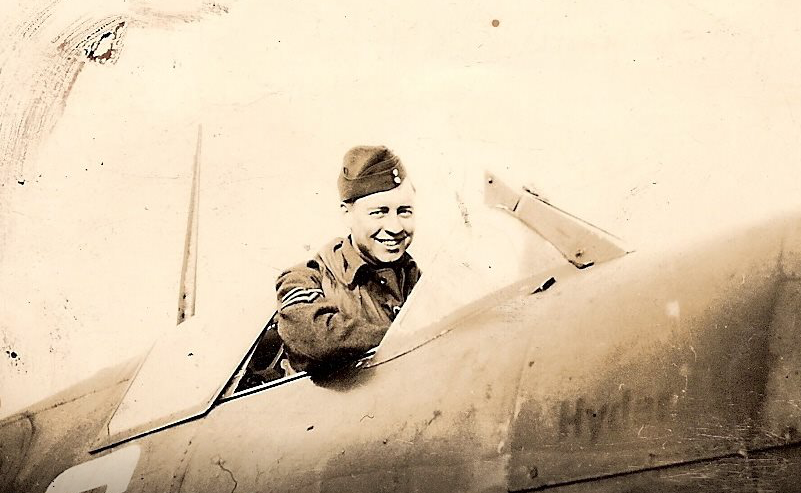 < = expand >
William John Bentley DoB 04/02/1920 AKA Bill, grew up with his Parents William and Esther and 3 sisters, Hazel, Shirley and Betty, in suburb of Willowdale, Toronto. With a passion for Cars and Aeroplanes he volunteered for service as a Pilot with the Royal Canadian Airforce in 1941. From initial training he successfully trained as a fighter Pilot. With his training completed he was posted to England where he converted to fly the RAF’s premiere fighter aircraft, the ‘Spitfire’. During the course of the War he served on in the UK on 152, 65 squadrons. In the summer of 1942 he was posted to Malta that at the time was fighting for it’s survival on 249 squadron.

On return to the UK he was posted to instructional duties on 57 OTU. As D day was being planned he was posted to RCAF 443 squadron, where he was initially flying operations from the UK but quickly found himself flying missions in support of ground troops from small make shift airfields just behind the lines in France. On the 30th July 1944 he was credited in shooting down a ME109 aircraft. As his career progressed he rose through the ranks and held a commission as a Flying Officer. He gained a total of 582 hours, with 475 hours on the Spitfire.

Unfortunately, on Saturday 12th August 1944 he was conducting an armed recce patrol NE of a small town in Northern France called Bernay over enemy territory, when his aircraft developed a glycol leak ( perhaps subject to ground fire?) and Bill was forced to Bail out. Sadly his parachute caught on aircraft and he was dragged down with the aircraft killing him. A tragic loss of a young man. The French patriots looked after his body, keeping him in a church yard until in 1947 the Commonwealth War graves gave his a permeant resting place.

All my research is compiled on a FB page.

Thank you! It is still work in progress. Managed to download the relevant squadron summary of events and Operational Record Books whilst it was free during the Lockdown. I will keep up loading information linked to Bill. This website is a fantastic source of information.