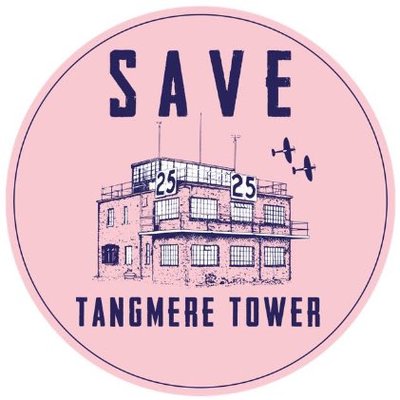 Most aviation and WWII Hurricane and Spitfire enthusiasts know about RAF Tangmere, a famous WWII Battle of Britain station known not only for sending up fighters to defend England, but also as a jump off point for Special Ops (SOE) missions. Google will of course turn up lots of information on Tangmere, with famous pilots Douglas Bader and Johnnie Johnson (who later led 127 Wing of RCAF) amoungst the many who flew from or served there. I was even recently able to find youtube high-def drone video footage showing the current tower in detail as well as the surrounding area.

As I researched a possible cycle route last winter along the Kent coastline, and having read the fantastic novel "Wings Over Summer" by RAF Group Captain Ron Powell putting Tangmere into a first person narrative, I came across the current Tangmere tower online only to find it was virtually in ruins. How many ghosts wander nearby or keep watch from the derelict tower, I was captivated by the imagery and at once thrilled that it still existed, as if it was a best kept secret that shouldn't be.

With the runways turned back to farmers fields, and with encroaching development, the Tangmere tower stands alone on one tiny patch of ground hemmed in by the farmer's furrows. I envisioned doing my best to visit and photograph the Tangmere control tower, and wondered if it could be (or maybe why it hadn't been) saved.

In my own mind, I planned a dusk concert with imagery projected on the walls, with 100 donors seated for the show accompanied by music, perhaps even the RAF band. And then, a lone Spitfire to circle overhead in salute. What a gesture I thought. Not a bad fund-raiser either. Would Prince Charles attend, apparently he spent some service time there. This would be an early stop-over on my cycle tour in August 2017. Unfortunately a surgery got in the way and sidelined me for a bit longer than I had hoped. More critically, I don't have a direct line to Buckingham palace or RAF Command (or really, anyone of authority in the UK).

I don't know if such an event will ever take place, but I am happy to have found out recently that there is now a very vibrant effort underway to save the Tangmere tower. All you have to do to support the effort is visit their twitter fundraising site, read the history, and, join in on the fun i.e donate.

Will a dusk slide show (on the tower itself) and flyover happen at the Tangmere control tower one day, maybe. I did send my idea on and I'd be sure to visit for it! If you can lend a hand, please forward the twitter site on (or re-tweet), make a donation, or perhaps just visit to take a picture. There is nothing like tourist and visitor dollars back in town to perk up the ears of regional tourism groups with funds. Let them know you visited or even enquire from afar if any events are planned, it helps. I hope to visit one day as well.