75th Anniversary of Victory of Battle of Britain 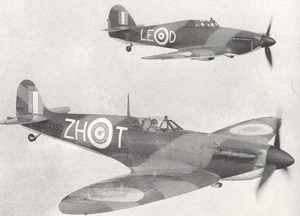 This Tuesday, September 15th, marks the 75th Anniversary of the victory of the Battle of Britain. In the U.K. a large Battle of Britain day flypast (40+ aircraft) will originate from various locations and sweep across English towns, in one of the largest gathering of airworthy Spitfires and Hurricanes. See the routes here. In Ottawa, Canada, on the 20th, a ceremoney and flypast including aircraft from Vintage Wings will partake in a commemoration at Parliament Hill.

The victory, described by Sir Winston Churchill as Britain’s “finest hour” halted a planned invasion of Great Britain and gave hope to a demoralized Britain and northern Europe. It was the first battle to be won by air power.

In tribute to "the Few", we are issuing our BETA launch press release, and, have embedded a video giving a 20 year retrospective, on some of the pilots 20 years later. Now 75 years later, we look back again at the pilots from the U.K, and countries like Poland, Canada, Slovakia, Czech Republic, New Zealand, the USA, Australia, and even Jamaica, as they celebrate their Battle of Britain pilots and aircrew. There are a lot of online resources on the Battle of Britain, especially recently at the 75th. The London Telegraph gives detail and addresses a few myths here.

The two planes together became Britain's answer. In honour of the Hurricane, please add Hurricane pilots here also (spoiler: many pilots flew both).

September 15, 2015 (Ottawa) – http://www.allspitfirepilots.org/, the first ever global Spitfire pilot database is announced for the 75th Anniversary the Battle of Britain.

The site, which allows historians and aviation enthusiasts alike to add pilot data including specific aircraft flown, images, comments, video, and pilot biography is introduced by trailpeak.com founder, Kurt Turchan. Trailpeak is Canada’s largest national database with more than 10,000 trails and is considered the nation’s pre-eminent destination for outdoor travel such as hiking and trekking.

"Allspitfirepilots.org represents a new adventure in acquiring information and creating a centralized, user-friendly site that people interested in aviation history can access", said Turchan. "The Spitfire played a critical role in the Battle of Britain and beyond, and is a key draw at air shows today capturing the imagination of would be pilots, enthusiasts, and history buffs. It is perhaps the most iconic aircraft of all time."

The BETA site, which is set up to capture information on Spitfire pilots, includes preliminary content describing 200 pilots. Other key features includes the:

• Ability for any user to add pilot information, sortie details with serial numbers, images, links, comments, or questions
• Ability to search for pilots in several ways including by name, country, town, and status, if known
• Ability to maintain a profile and follow pilots which includes email notifications when the pilot page gets updated
• Addition of 21,000+ Spitfire serials loaded into the database allowing users to add photos, comments, and links
• Ability for enthusiasts from around the globe to engage others through a forum on every pilot and aircraft page

Turchan has launched the BETA site to gather feedback and hopes to donate his work to a historical society once fully tested. He also wants to attract half a dozen digital curators from various countries. Andrew Pentland graciously allowed his database of Spitfire serials to be included in the site. Once a complete serial number database for the Hurricane is located, plans are to support this aircraft type as well.

“A pilot who recently caught my attention was Spitfire pilot Tony Snell from the U.K. whose wartime escapades include running away from a firing squad. His post-war adventures roaming the world as an entertainer and sailor before establishing a resort in the British Virgin Islands have also been added to his page. Whether pilots were aces or flew just a few sorties, http://www.allspitfirepilots.org/ wants to honour them all," added Turchan.

Kurt Turchan
Use Contact Us at the bottom of the site