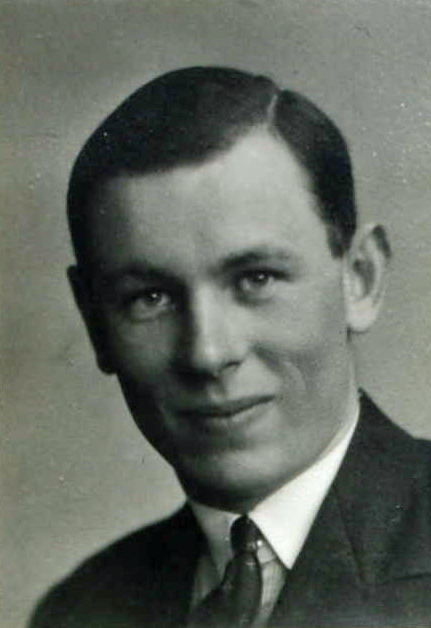 < = expand >
Stephen Gerald Beaumont was born on 2nd May 1910, the eldest of three sons of Gerald Beaumont of Hatfield Hall, Wakefield. His father, who had been awarded the MC and Bar in the First World War, headed the family firm of Greaves, Atter & Beaumont, solicitors.

Stephen was educated at Oundle and New College, Oxford. In 1931, after visiting Kenya, he entered the family firm. After his father's death he took on increased responsibilities in his twenties.

Beaumont was commissioned in April and was one of the first three pilots trained with 609, gaining his wings in August 1937.

He was one of 609's original Flight Commanders but in January 1939 he handed over to F/O PH Barran, because of business and other commitments. Called up on 24th August 1939, he took 'B' Flight over after Barran was killed on 11th July 1940.

On 11th June Beaumont and eight other pilots were dispatched to Warmwell in Dorset to rendezvous with an Imperial Airways Flamingo carrying Winston Churchill and escort it to Briare, near Orleans in France.
Two days later he again escorted the Flamingo, which this time carried the Prime Minister and Lords Halifax and Beaverbrook to Tours in a bid to keep France in the war.

The airfield at Tours must have been a good example of the disintegration into which France had sunk. Here we were with the Prime Minister and, initially, there was no one there to meet him. Tours airfield with its uncut grass and shabby buildings, resembling a bankrupt flying club, was totally unlike our spruce RAF stations. If this was an aerodrome of the French Air Force, then its morale must have been rock bottom.

Beaumont served with 609 until he was posted to 7 OTU Hawarden on 2nd August 1940 as an instructor.

The posting was partly because his 26-year-old squadron commander felt that Beaumont, being 30, would not survive. Years afterwards, George Darley, the CO in 1940, greeted him 'Hello Beau, still alive ? That's thanks to me'.

When Beaumont left 609, seven of the twelve pilots with whom he had gone to war were dead and two were invalids. Of an additional twelve who had joined later, only three were alive.

The unit was redesignated 57 OTU on 1st November 1940. Beaumont was posted to the newly-formed 59 OTU Turnhouse on 22nd December 1940.

In August 1942 Beaumont was promoted Wing Commander and posted to Andreas on the Isle of Man. The posting was urgent as his predecessor had crashed a Whitley bomber on a joy ride killing himself and six passengers including a woman friend. As a solicitor Beaumont was ideal for the mission. He discovered that on the afternoon of the flight the last entry in the station commanders mess book was two bottles of port.

Andreas was a diversionary airfield for Flying Fortress bombers coming in from the United States and Beaumont invariably welcomed pilots and crews.

When Beaumont greeted a sergeant who bad just landed on the Isle of Man, the American airman remarked 'Say colonel, I always knew England was a little island but I didn't know it was as small as this'.

In the spring of 1943 Beaumont briefly commanded Woodvale on the Lancashire coast before moving to Zeals in Wiltshire, where he boldly amalgamated the RAF and WAAF messes.

Posted as group captain in July 1943 to 84 Group, 2nd Tactical Air Force, in the role of Deputy Air Officer Administration, he was soon involved in preparations for the D-Day invasion.

In Normandy he lived and worked in the back of a three-ton truck complete with washbasin. After being invalided home with hepatitis he returned to 2nd TAF in time for VE Day.

During the next 50 years he said that the appointment which brought him most satisfaction was the clerkship of the Wakefield Grammar School Foundation consolidated charities.

In 1967 Beaumont was appointed Deputy Lieutenant for the West Riding of Yorkshire, and in 1979 High Sheriff of West Yorkshire.

He retired to Devizes in Wiltshire