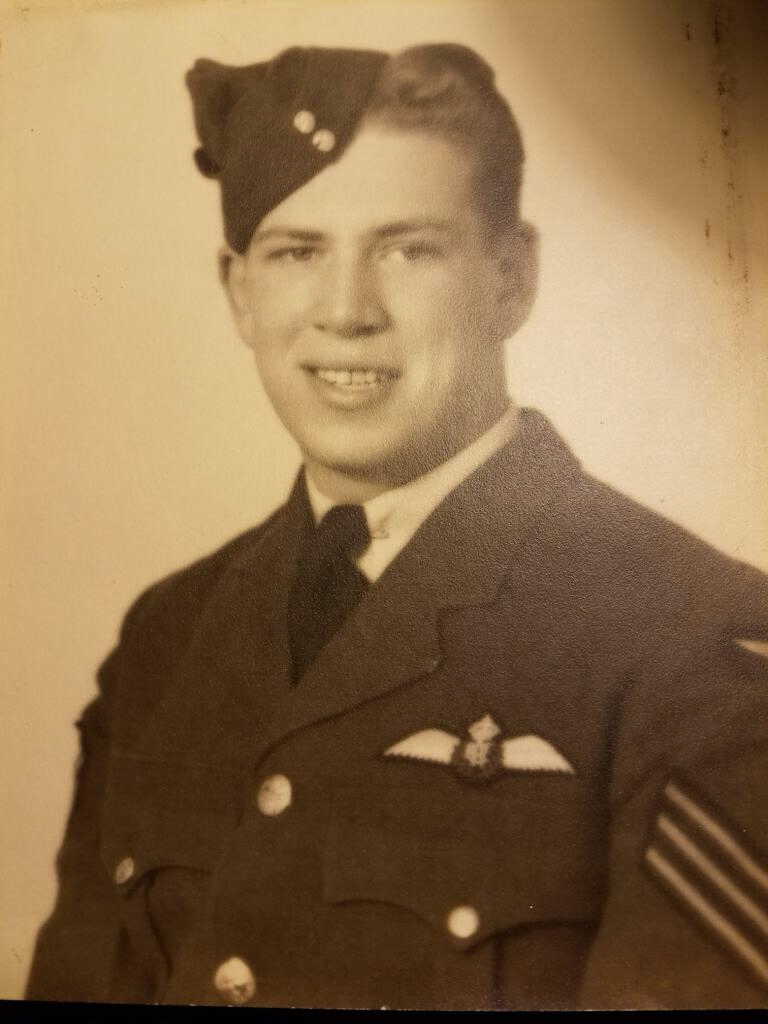 The morning’s operations commenced when 6 Spitfires took off and in sections of 2 aircraft each, made a weather recce of the forward areas. Two of these missions were carried out without incident. The third mission proved more exciting – while flying over the UDINE area, the two aircraft observed 3 enemy aircraft flying N.W. at 11,000 ft. These aircraft proved to be Me 109’s and when West of UDINE the E/a came in to attack the Squadron aircraft. The Spitfires immediately turned into the E/a, line astern and a chase followed which ended when the Me 109’s climbed up and were then engaged. F/O H.G. PROUDMAN flying one of the Spitfires engaged one of the enemy from line astern opening up from 200 yards, cannon and M.G. fire being observed on the fuselage and pieces of the enemy were seen to fall off. Then the enemy aircraft pulled up streaming black smoke, F/O PROUDMAN continued the pursuit up to 16,000 feet when the enemy turned to starboard and dived down, while still following and closing in for a further attack F/O PROUDMAN closed to within 200 yards when the enemy aircraft suddenly burst into flames, turned onto its back and finally crashed North of UDINE. During this engagement, W/O STRATTON W.W. (Canadian – R.153808) pilot in the other Squadron Spitfire, engaged another of the enemy from line astern and opened fire from at 200 yards. Cannon and M.G. strikes were observed on the cockpit and along the fuselage. White smoke commenced pouring from the E/A and it was last seen still smoking and spiraling down at 4,000 feet. W/O STRATTON was compelled to break off this engagement as he in turn was being attacked by the third E/A. He reversed the position however and chased the enemy aircraft to 35,000 feet when he lost site of it in some thick cloud. The remainder of the mission was carried out without further incident. Both pilots returned to base without injury and there was no damage to the Squadron aircraft. This is the first time that enemy aircraft had been encountered for some time. Claims for the mission were – 1 E/a destroyed and 1 E/a Probable.

The VENICE, TREVISO, and CAORLE area was covered by the first six aircraft and when 7 miles South of TREVISO, 40 plus box cars were sighted. These were immediately attacked, two strafing runs being made. As the leader was climbing away after the second run, W/O STRATTON, W.W. (Canadian R.153808) pilot in Spitfire IX P.T. 935 (who was flying No. 2 in the formation) called over the R/T to say that his aircraft had hit a tree whilst strafing but that he was O.K. The formation reformed and were flying just North of VENICE, heading for the coast when W/O STRATTON again called to say that he was in difficulties and that he would have to bale out. The leader immediately turned to get behind the No. 2 but could not see him. ‘No. 2’ then called and said that he was over VENICE and heading South down the coast. The leader then saw ‘No. 2’ and told him to take things easy. Shortly after this W/O STRATTON asked whether to bale out or crash-land and on being instructed to bale out, he was seen to turn away under the leader’s nose and west out of sight. The aircraft at this time was flying at about 7,500 feet over the solid stretch of land just South of CHIOGGIA. The area was covered for some time but nothing was seen of either of the pilot or his aircraft. On failing to return to base, W/O STRATTON was reported as MISSING PARTICULARS UNKNOWN and the aircraft as Cat E. 2 (MISSING). The result of the strafing attacks was 20 box cars damaged.