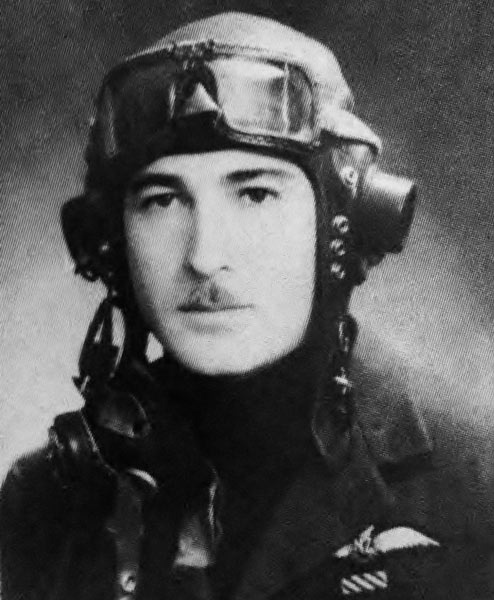 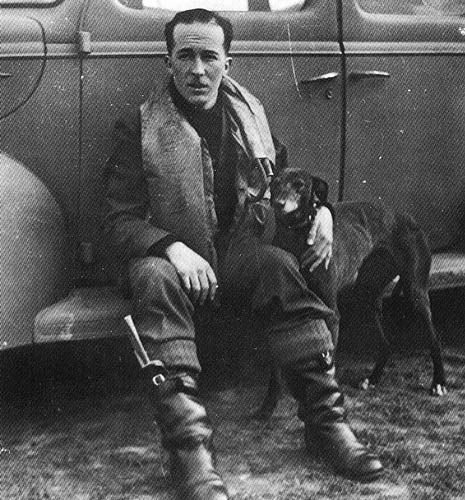 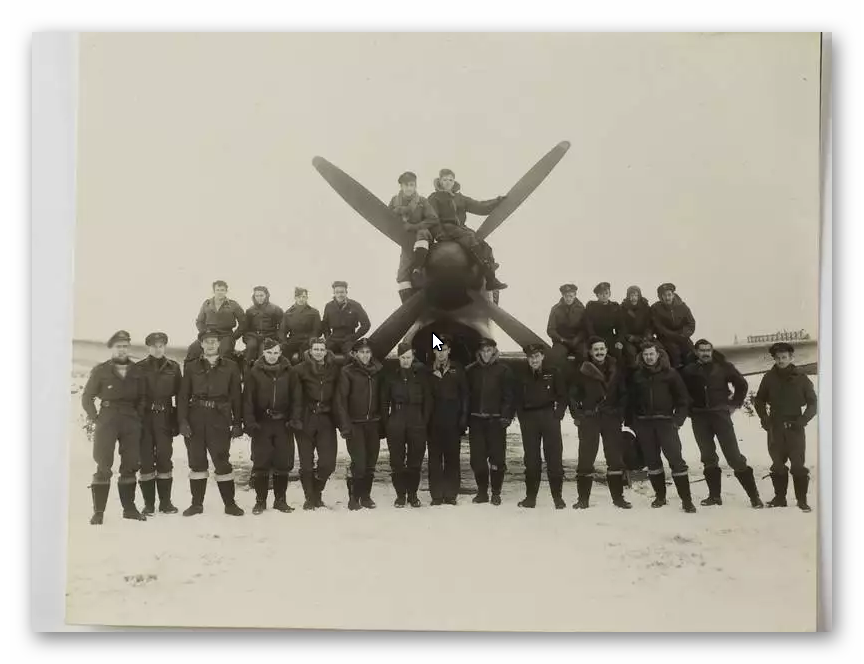 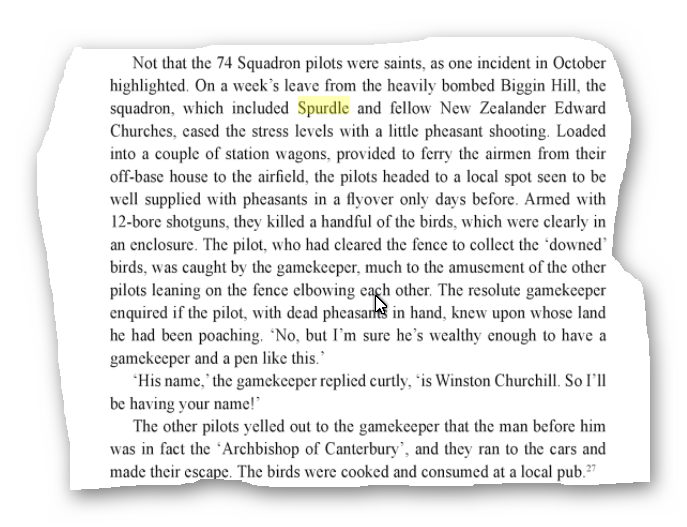 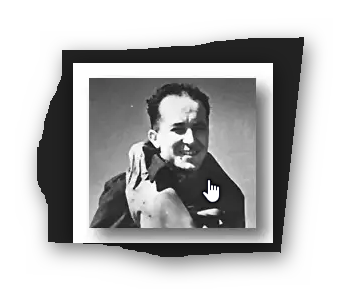 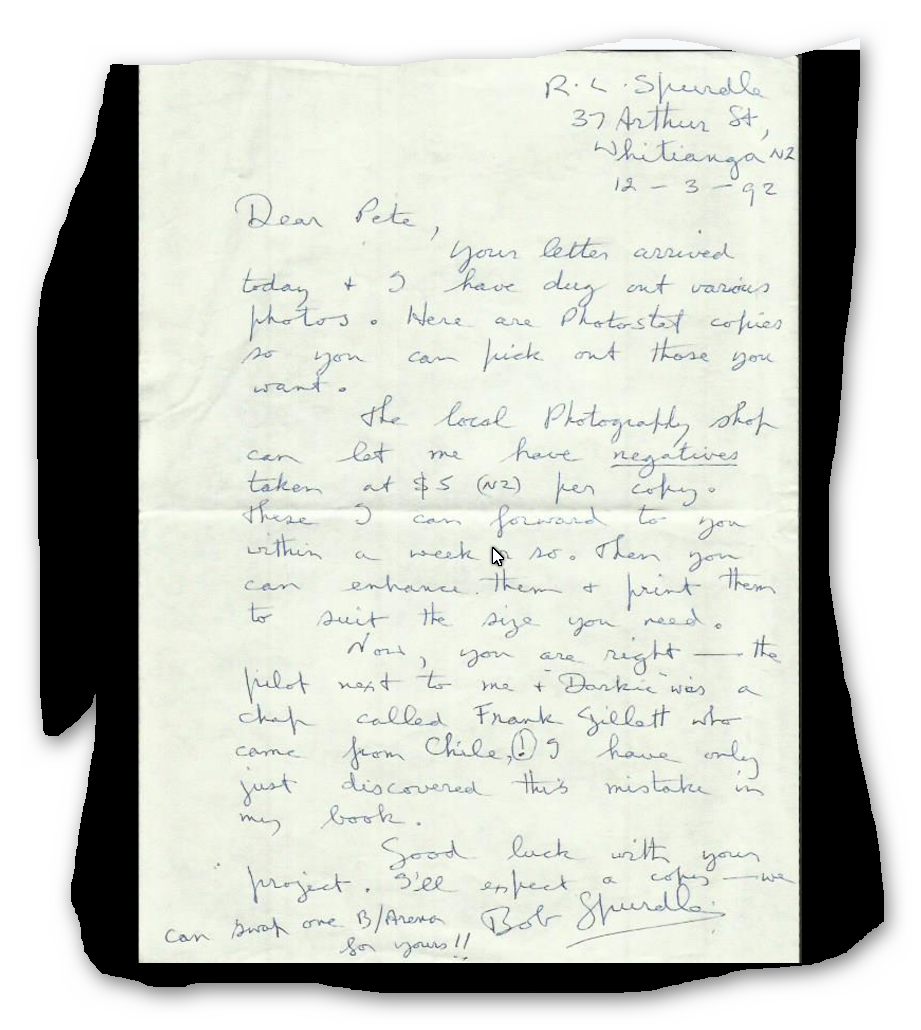 < = expand >
Robert Lawrence Spurdle was born in Wanganui, New Zealand on 3rd March 1918 and attended Wanganui Collegiate School from 1932 to 1934. In early 1939 he applied for a short service commission in the RNZAF, was provisionally accepted in July and reported to Rongotai for ground training on 20th September.

He was on the 11th Short Service Course, the last one of the scheme. Spurdle went to No. 1 EFTS Taieri for his initial training course on 21st October and moved on to No. 1 FTS Wigram on 18th December. He was selected for training as a light bomber pilot but was held back because of sickness and completed his training with No. 13 (War) Course.

On 7th June 1940 Spurdle sailed for the UK in the RMS Rangitata. He was posted to 7 OTU Hawarden on 4th August and after converting to Spitfires he joined 74 Squadron at Kirton-in-Lindsey on the 21st.

Spurdle damaged a He111 on 14th September. Whilst chasing Me109's on 22nd October Spurdle's Spitfire broke up in a high speed dive and he baled out, unhurt. Although attacked by enemy aircraft during the descent, he landed safely. His Spitfire, P7364, crashed at Hadlow Place, near Tonbridge.

On 14th April 1941 Spurdle was posted to 91 Squadron at Hawkinge. He probably destroyed a Me109 on 7th May and damaged another on the 18th. He left 91 on 23rd May to join the Merchant Ship Fighter Unit at Speke.

During his time with the unit, Spurdle made two trips to the USA, in the Camships Novelist and Eastern City.

In February 1942 Spurdle rejoined 91 Squadron and was appointed 'A' Flight Commander in April. He destroyed a Me109 on 25th July and shot a Fw190 down into the sea on the 26th.

Spurdle was awarded the DFC (gazetted 14th August 1942) and posted to Malta but was found to be 'operationally tired' and went instead to 116 Squadron at Heston on anti-aircraft co-operation duties.

In November 1942 Spurdle sailed for New Zealand, via the USA, for attachment to the RNZAF. He was posted to Ohakea, where he started the Camera Gun Assessing School at 2 Observers Training School. In late May 1943 Spurdle was appointed 'A' Flight Commander in 16 Squadron, then preparing for its first overseas tour at Woodbourne.

Spurdle left for the UK in December, in the Umgeni, going via Melbourne, Ceylon, the Suez Canal and Gibraltar. He disembarked on 26th March 1944.

His attachment to the RNZAF ceased and he joined the newly-reformed 130 Squadron at Lympne on 13th April. In early May he was posted to 80 Squadron at Hornchurch. Spurdle was appointed a Flight Commander on 25th May and took command of the squadron on 20th July. At the end of September 1944 the squadron crossed to the Continent and on 8th October it joined 122 Wing at Volkel in Holland.

On an offensive patrol on 8th December Spurdle damaged two Ju188's, his final aerial encounter with the Luftwaffe. He was posted to HQ 83 Group on 15th January 1945 and awarded a Bar to the DFC (gazetted 26th January 1945).

Spurdle was given training in radio work and on 24th March he flew across the Rhine in a glider in the second airborne crossing, as OC three RAF radio teams. The gliders landed at Wesel with serious casualties and were relieved by the Army after five days. Spurdle was later with the 11th Armoured Division, working in a radio tank controlling 'cab rank' fighter support. He was on the Elbe river when the war ended.

On 18th July 1945 Spurdle was posted to CGS Catfoss for a Pilot Attack Instructors course. On the 21st he transferred to the RNZAF, relinquishing his RAF commission.

He sailed for New Zealand in late September in the RMS Rangitata, the same ship which had taken him to the UK five years earlier. Spurdle went on to the Reserve on 18th April 1946 as a Squadron Leader.

Citation:
"Since the award of the D.F.C. on 14 August 1942, this officer has taken part in a large number of operational sorties. He has destroyed at least four enemy aircraft and damaged several others Sqn Ldr. Spurdle has served on both the Pacific and Western fronts. An outstanding and courageous leader, he has, throughout, displayed a fine fighting spirit and great determination."

Details: Received as a bar for on the ribbon of the first DFC
On December 8th, 1944, Spurdle damaged two Junkers Ju 88 dive bombers in which his last engagement with the Luftwaffe would become. Early in January 1945 he was releived from operations after having completed his fifth tour and was awarded a Clasp to his DFC.

Unfortunately I could only find Squadron codes not Serial numbers for the aircraft.
reply
post