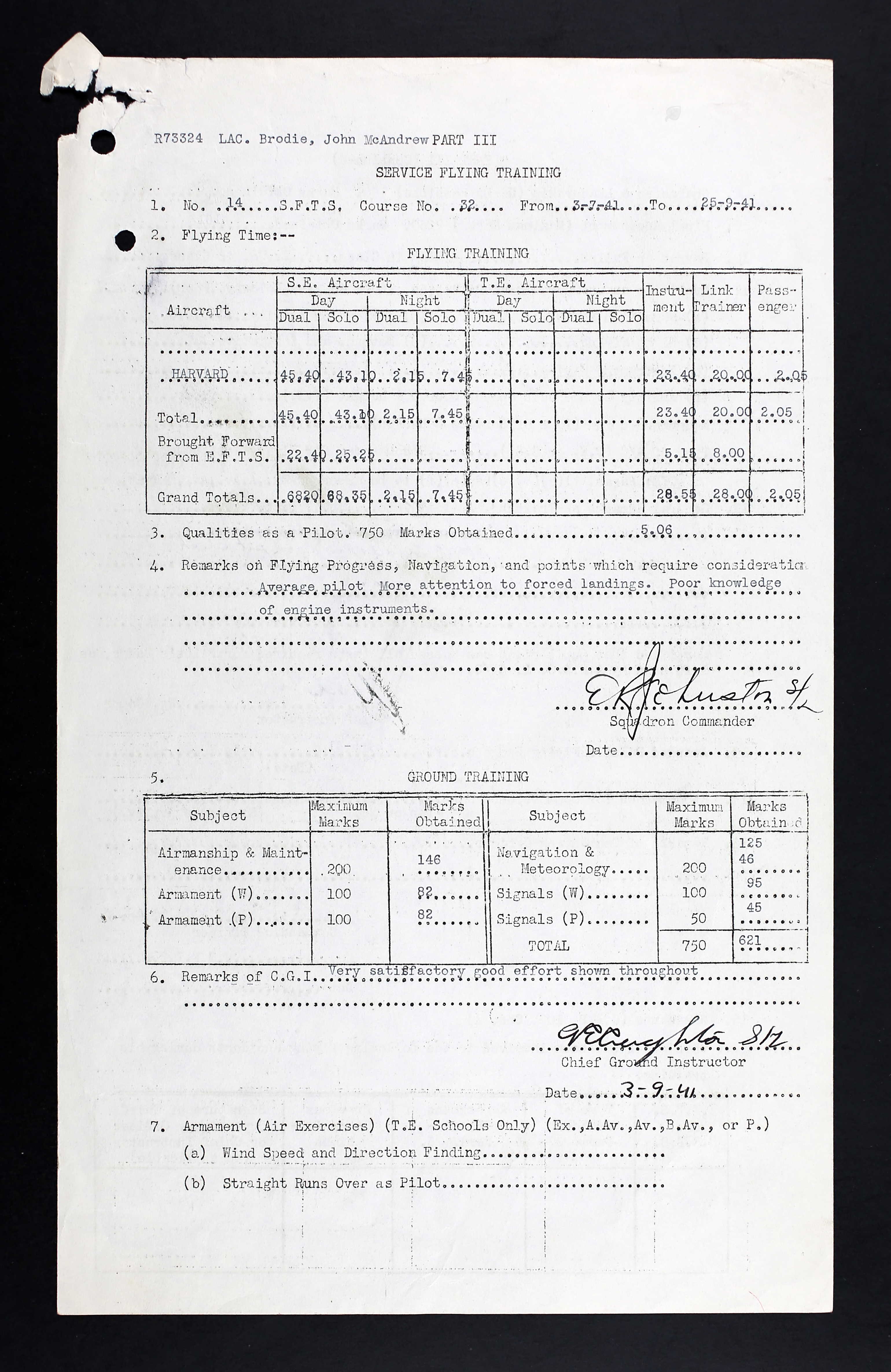 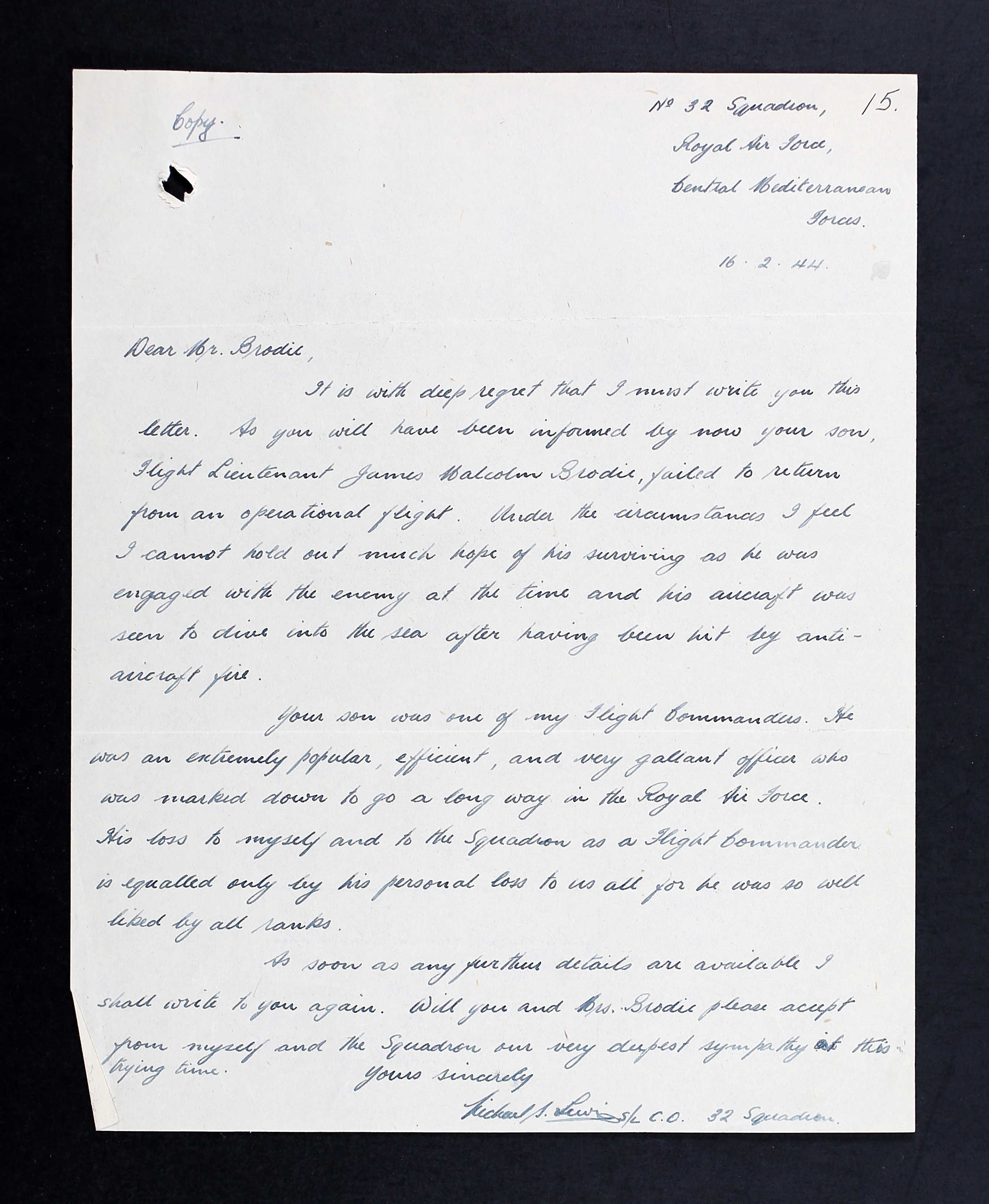 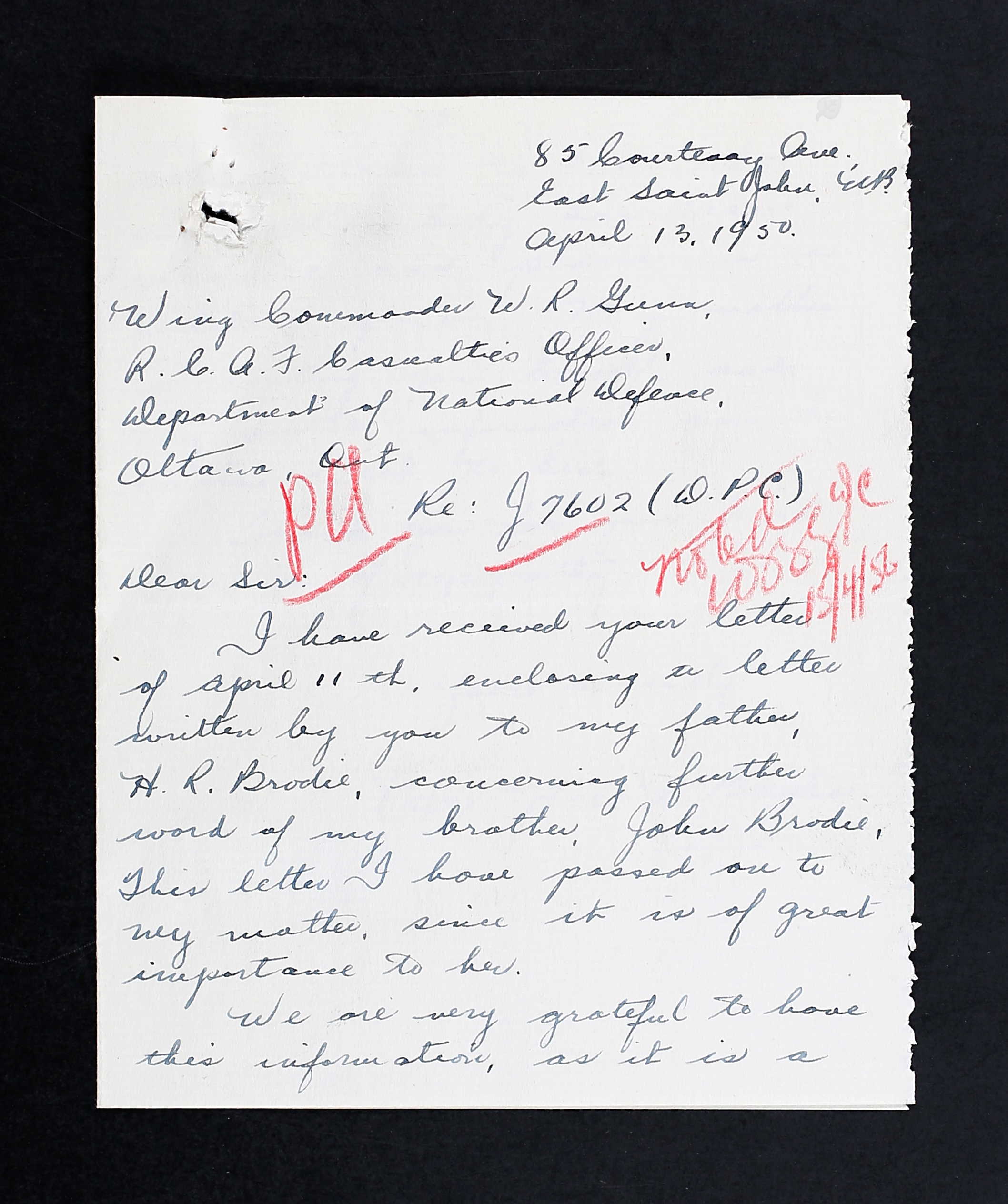 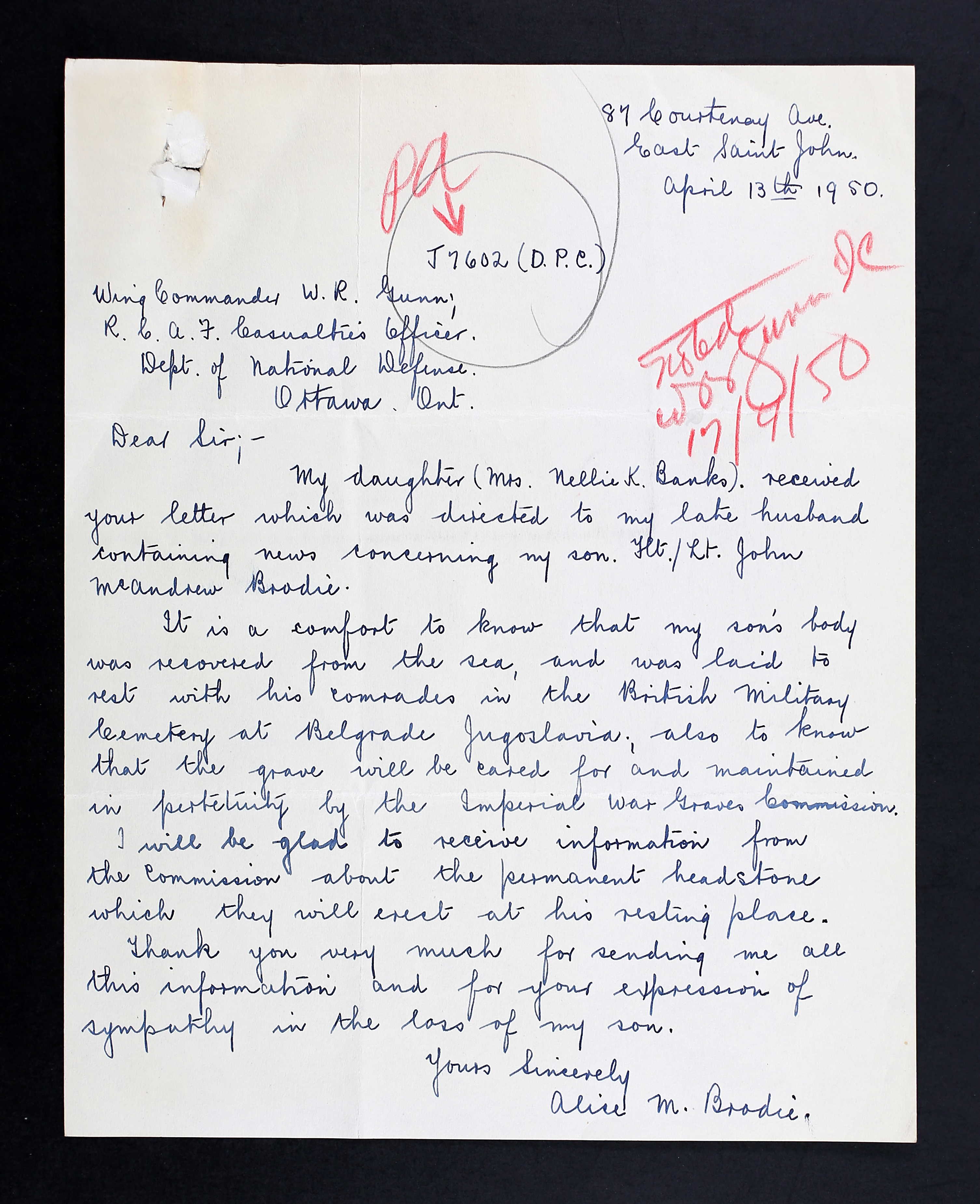 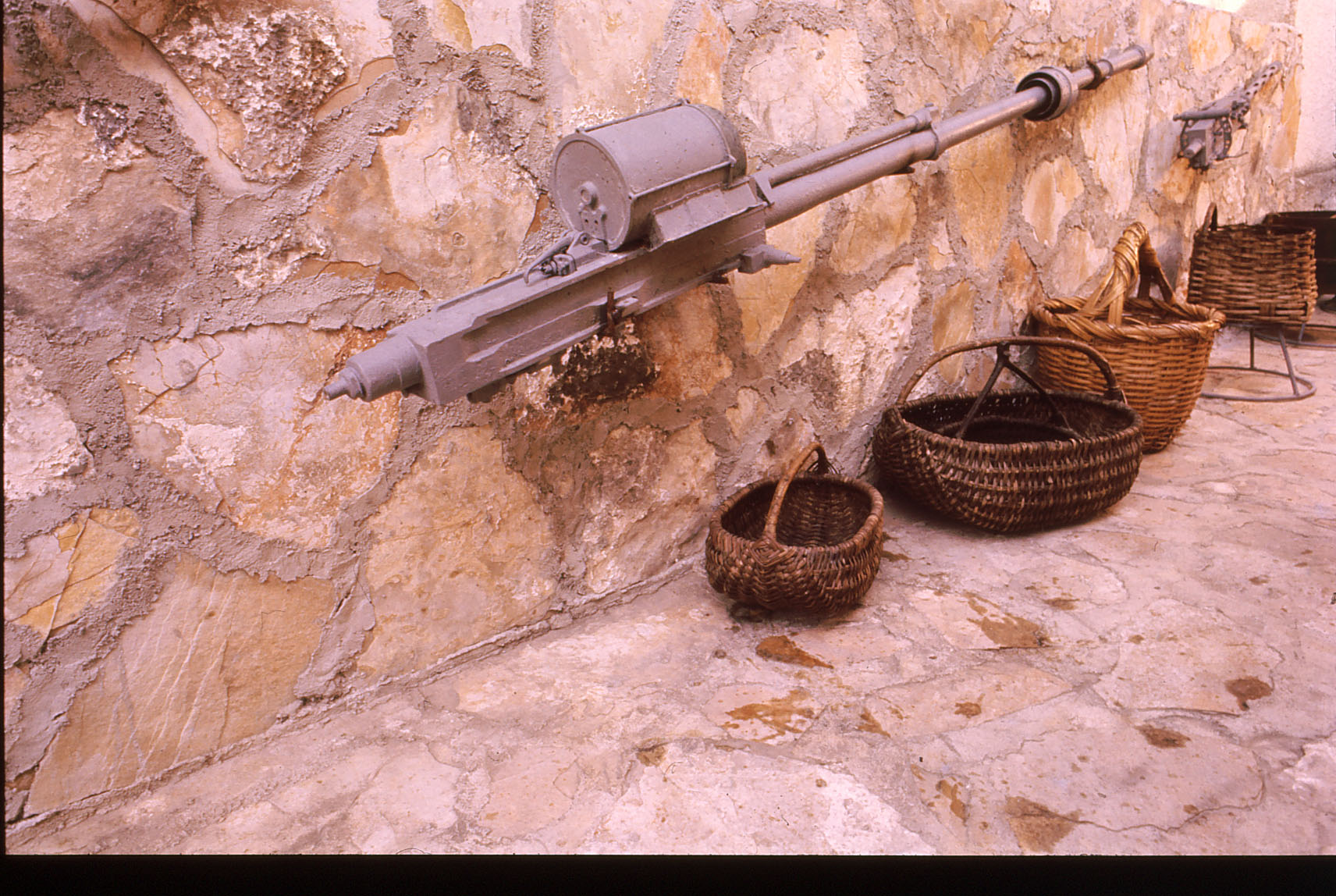 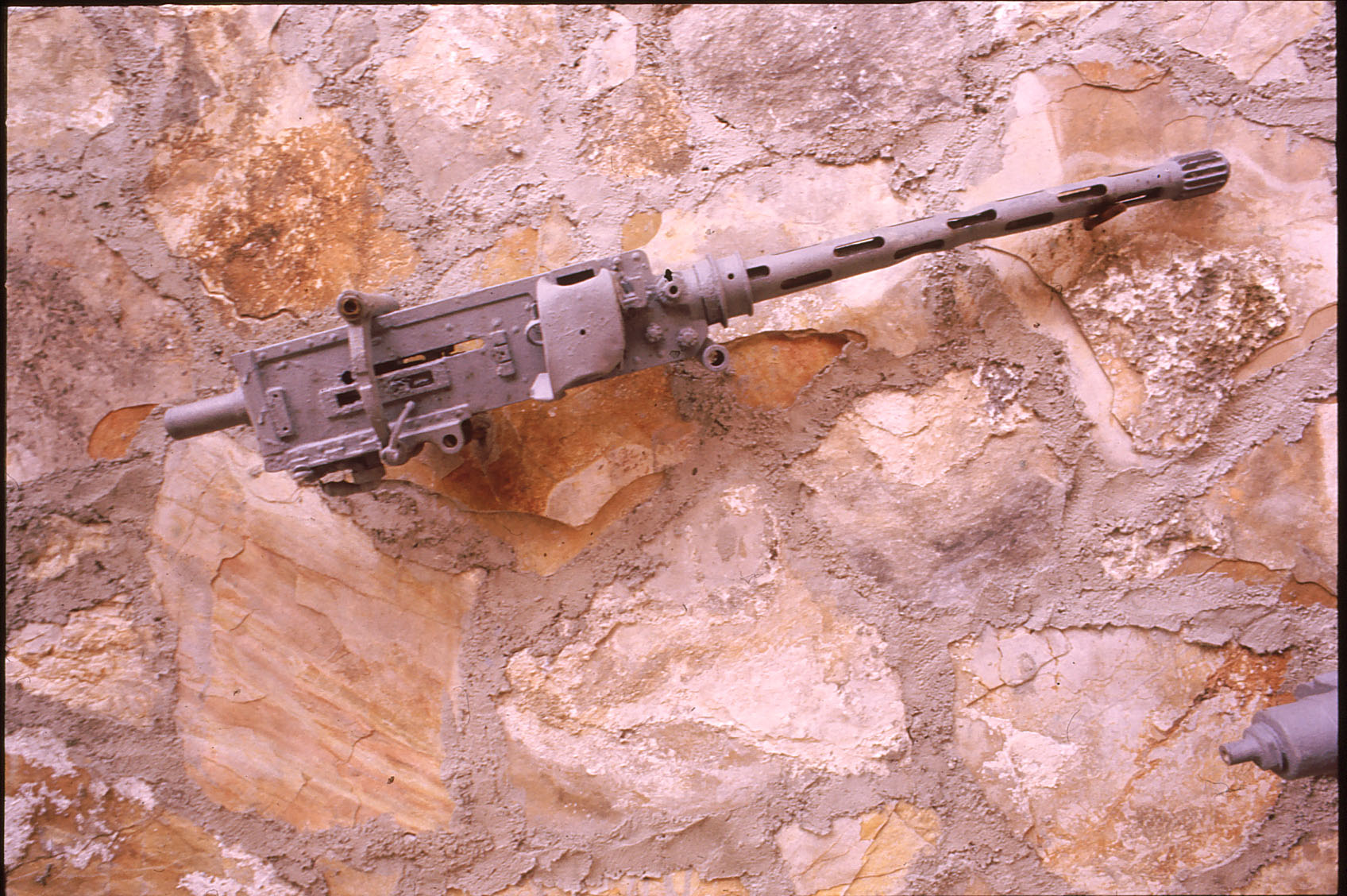 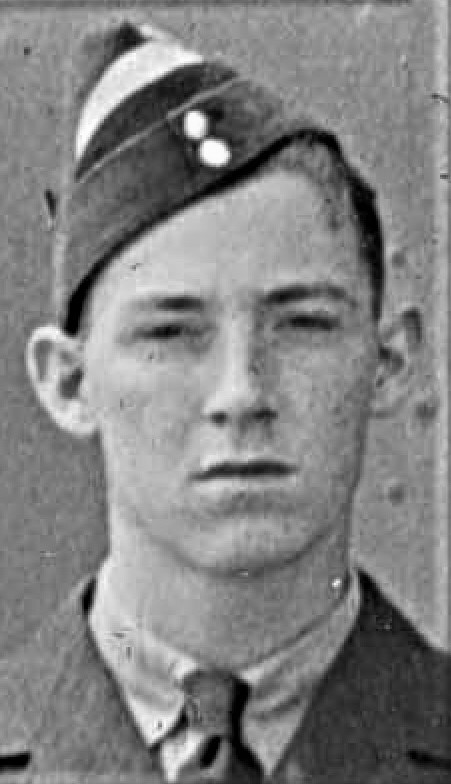 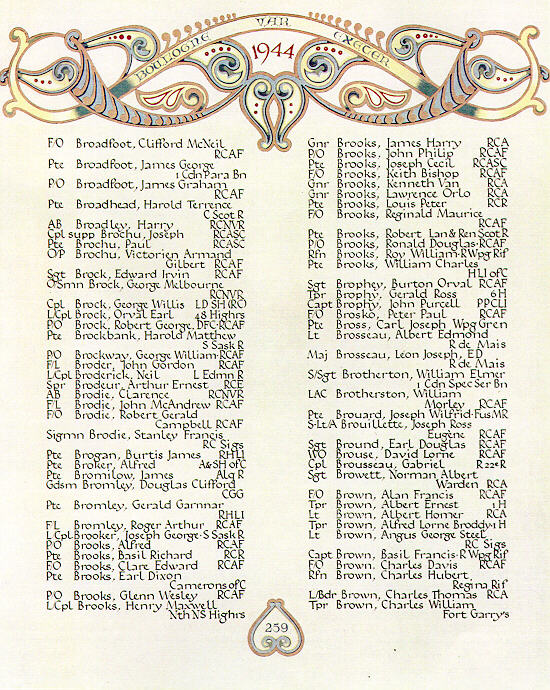 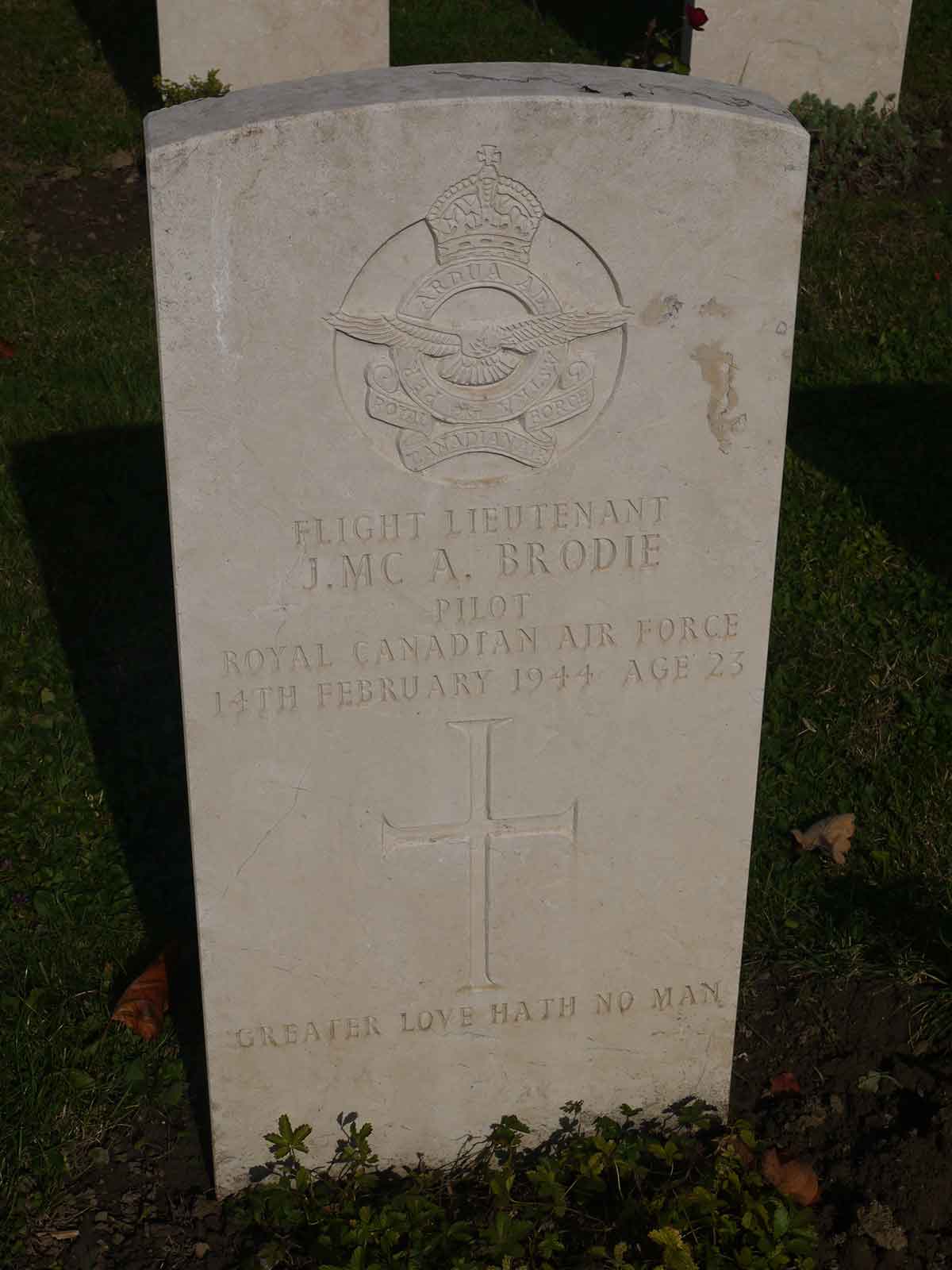 < = expand >
There is quite a bit of information on F/L Brodie as researched by S. Gojak, a member of this site. Brodie gained his training at EFTS Eugene, then, SFTS Aylmer, before deployment. At Euqene he was noted to be hard working, enthusiastic, and, "has the right stuff".

As a Canadian in the RCAF, he served in the famous 32 Squadron, which after the Battle of Britain (one of the most successful squadrons) moved to North Africa, then, Italy, then Greece. During operations out of Foggia Italy against occupied Yugoslavia (today Croatia) he was on an intruder mission attacking various ground targets. After successfully attacking un-related ground targets, he carried out a direct sea-side attack on the waterfront of Baska Voda (today a very picturesque tourist town on the Dalamation coast). On his second run, taken parallel to the cliffs above town and along a road, he was hit by anti-aircraft (flak) fire and his aircraft was badly damaged, belching black smoke. He ran out over the sea, lost control, and went into a straight dive into the ocean, just prior calling over the R/T "I've had it, I am going in". Date of death, Feb 14, 1944.

There was correspondence to family, with an unsuccessful attempt to reach the father, whereupon the sister replied to the letter written by the 32 Squadron leader, an Australian. There is another letter in 1950 from the mother thanking RCAF officials for the burial details.

John McAndrew Brodie was just 23. In his possessions, two books, one of which was titled "Dog Stories" showing the innocence of many young pilots faced with the realities of war. His plane plunged beneath the sea, his body was recovered in the 1950s and he was buried in the Commonwealth War Cemetery YUG (Belgrade), lot 10.D.1, and these details are available online. Any images of F/L McAndrew in his aircraft would be appreciated.

In his application, it was noted his sports were "hockey, swimming, tennis, badminton, basketball, stamp collecting, fishing and hunting". He had his flyers badge and 153 hours of flight time on his enlistment, training, and, no prior military experience. Religion: United Church, address in Saint John noted as 21 Golding Street. Oddly, his RCAF enlistment papers show him as citizenship "British" possibly due to his parents nationality. Other records show him being transferred from OTU to 1 Sqdrn Tangmere in Feb. 1942 then about a month later transferred to 32 Squadron in March. Records also show some injuries in 1942 and sick leave (including convalescent hospital), rejoining 32 Squadron.

No other records are shown until his death in 1944. This assumes he was operationally flying for two years with 32 Squadron, likely building up considerable experience. He was very well liked by all ranks, other correspondence from Lewis notes. 32 Squadron was only in Italy for a few months until being transferred back to North Africa. It is during this time (early 1945) and shortly before being transferred to North Africa that F/L Brodie was killed. It is possible 32 Squadron was termporarily assigned to assist the Balkan airforce in ground assault in late 1944 and early 1945.

Some correspondence with the family is shown in the attached file uploads. It should be noted his father was from Australia, his mother from Scotland.

Locals have retrieved some parts of the aircraft, namely, machine gun, and a canon.Fuselage and engine block are still under the sea, but also a more current identification is needed. The author of this report has recently successfully performed a dive on a wing (Aug 2017). It is likely other parts remain, although this has not been determined. Any family with further records, letters, or pictures are encouraged to post these here.

details on 32 Squadron - with Italy note

The first picture in All images is the Browing MG from private colection od Mr. Rajko Jurišić from Baška Voda. The second one is the picture from Aylmer flying school ( John McAndrew Brodie is marked under no. 1.)
reply
reply: andrea John McAndrew Brodie 2016-04-01 18:32:40

The Browing MG belonged to JF 344 , flown by John McAndrew Brodie. Salvaged from wreck, once in private colection of Mr. Rajko Jurišić from Baška Voda.

The cannon from JF 344, once at collection of Mr. Rajko Jurišić, Baška Voda, Croatia.

13 Greater love hath no man than this, that a man lay down his life for his friends.
King James Version (KJV)
reply