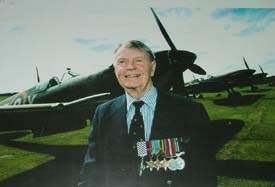 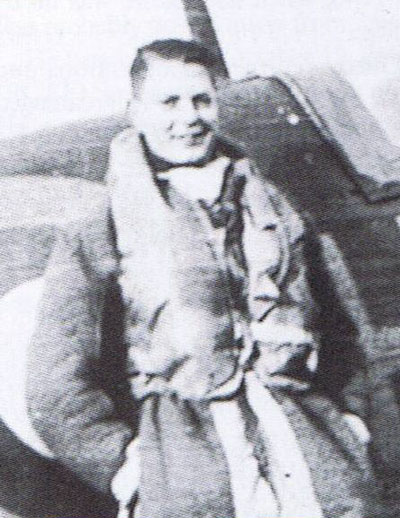 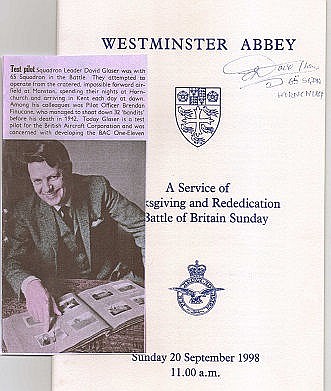 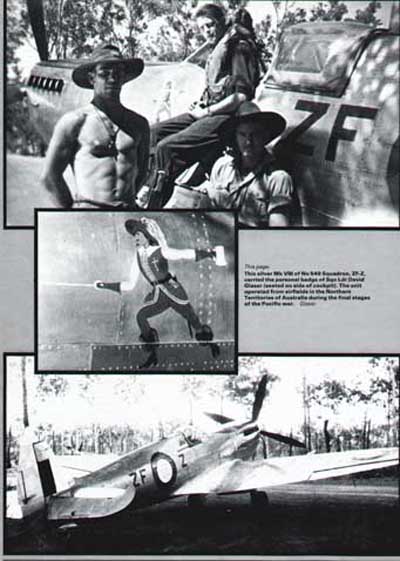 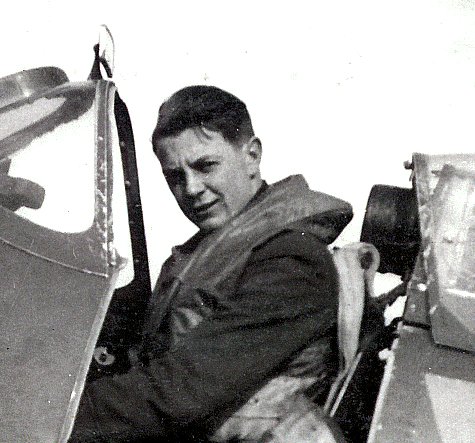 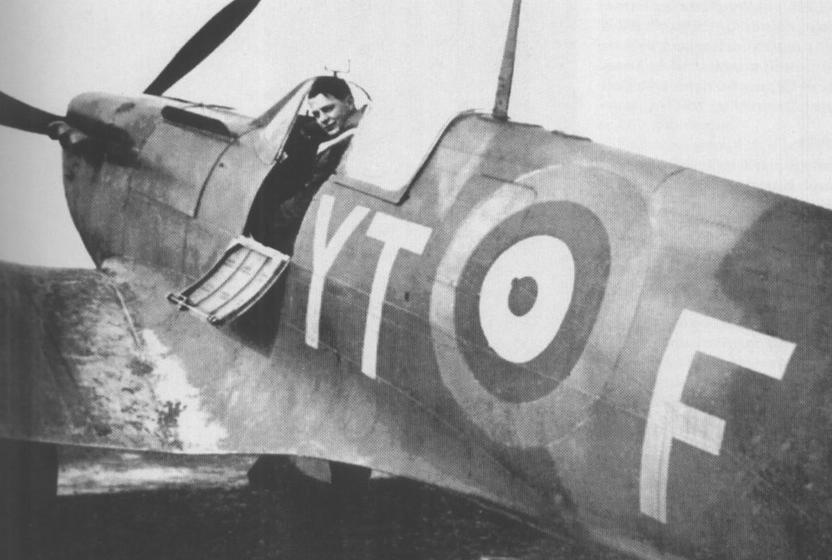 < = expand >
S/L Ernest Derek Glaser, usually called Dave, died in 2001. It is re-printed here in order to act as a second digital copy;

SQUADRON LEADER DAVE GLASER, who has died aged 80, was an RAF pilot mistakenly shot down off Plymouth, Devon, by a British warship during the Battle of Britain.

Struggling to free himself from his parachute, which had enveloped his head, Glaser had all but given up hope when the chute floated away and he was rescued. Aged 19, Glaser had joined No 65 Squadron at Hornchurch on July 13 1940, just three days after the date regarded as the beginning of the Battle of Britain, which raged overhead until October 31, when the RAF's supremacy ended the threat of German invasion.

Ernest Derek Glaser, always known as Dave, was born on April 20 1921. In the First World War his father had been a pilot in the Royal Flying Corps. After attending Lancing House and Bloxham schools young Dave was accepted, in April 1939, for flying training in the Royal Air Force Volunteer Reserve.

Glaser had been inspired to become a pilot some years earlier after meeting Jeffrey Quill who, in 1936, as a Supermarine test pilot, had flown R J Mitchell's Spitfire prototype and earliest production aircraft. Quill had been a frequent visitor to The Bugle, Glaser's father's pub on the Hamble in Hampshire.

In 1940, Quill was temporarily attached to No 65 Squadron for - as he put it - "a spot of practical" in order to recommend modifications in the light of combat experience. Glaser was delighted, on his arrival, to find himself flying No 2 to his boyhood hero.
Glaser soon had examples of combat himself. On August 12 he was preparing to take off from Manston when a formation of low-flying Dornier 17s attacked the airfield at low level, damaging hangars and cratering the flight-path. Glaser recalled: "Everybody just opened up their throttles and went hell for leather."

Awaiting the scramble bell during the Battle of Britain Glaser had occupied himself by fashioning a lucky talisman representing The Laughing Cavalier. Glaser reckoned that, together with a cavalier which he had had painted on his Spitfire (in an example of what was known as nose art), it helped to see him through the war.

In this period he was promoted flight lieutenant and was serving as a No 234 Squadron flight commander when he was shot down into the Channel off Plymouth in Devon. Vowing to be more circumspect in the vicinity of the Royal Navy, Glaser resumed operations with Group Captain (subsequently Air Chief Marshal Sir Harry) Broadhurst's Spitfire wing based at Hornchurch, Essex, but frequently operated from Manston, the Kent coastal airfield, and other south-east England No 11 Group airfields.
Following the Battle of Britain, in 1941 Glaser became an instructor at No 53 Operational Training Unit until August, when he joined No 234, a Spitfire squadron carrying out offensive sweeps over northern France. In 1943, Glaser was posted to Australia to form and command No 549, a Spitfire squadron stationed at Darwin in the Northern Territory.

In the New Year of 1945 he received command of No 548, a Spitfire squadron similarly charged with defending Darwin against Japanese air attack. After two years he returned home, was granted a permanent commission and posted to Linton-on-Ouse, Yorkshire. There he was flight commander of No 64, a half-strength Hornet fighter squadron.

Glaser was delighted in 1949 when he was selected to qualify as a test pilot, again following his hero Jeffrey Quill. Glaser attended No 8 Course at the Empire Test Pilots' School, then situated at Farnborough, Hants (and now based at Boscombe Down, Wiltshire).
In 1950, Glaser was employed as an RAF experimental test pilot at the Royal Aircraft Establishment, Farnborough, until 1953, when he joined Vickers Armstrong at Hurn, Bournemouth, Hants. Becoming chief production test pilot, Glaser was involved with the Varsity. This was a post-war replacement for the trainer version of the two-engine Wellington bomber. He also tested the world's first turbine-powered four-engine airliner, Sir George Edwards's Viscount - a plane then described as "a jump into the future".

But his chief contribution was his exhaustive production testing of the Valiant, the first of the RAF's four-jet bombers, which preceded the Vulcan and Victor in Britain's V-bomber nuclear force. Glaser was also involved with the BAC 1-11s, one of Britain's best selling airliners. When, in 1963, he first flew the jet, he handled it like a Spitfire and was apt to fly over Hurn airfield so low that onlookers were put in mind of a Flymo.

In 1979 Glaser was appointed flight operations manager and test pilot instructor of Rombac, an arrangement under which BAC 1-11s were built under licence in Romania, where his robust airmanship was much admired his pupils. Glaser retired in 1983 from British Aerospace - as Vickers, BAC and other merged aircraft manufacturers had become - and worked as an aviation consultant, while deriving much pleasure from sailing.

He was also invited to join a roadshow of British, American and German Second World War pilots, which toured American theatres under the billing A Gathering of Eagles. Glaser received the DFC in 1942 and Air Efficiency award in 1946. He was awarded Queen's Commendations for Valuable Service in the Air in 1953 for military, and in 1968 for civil, test flying.

Glaser's obituary from The Telegraph