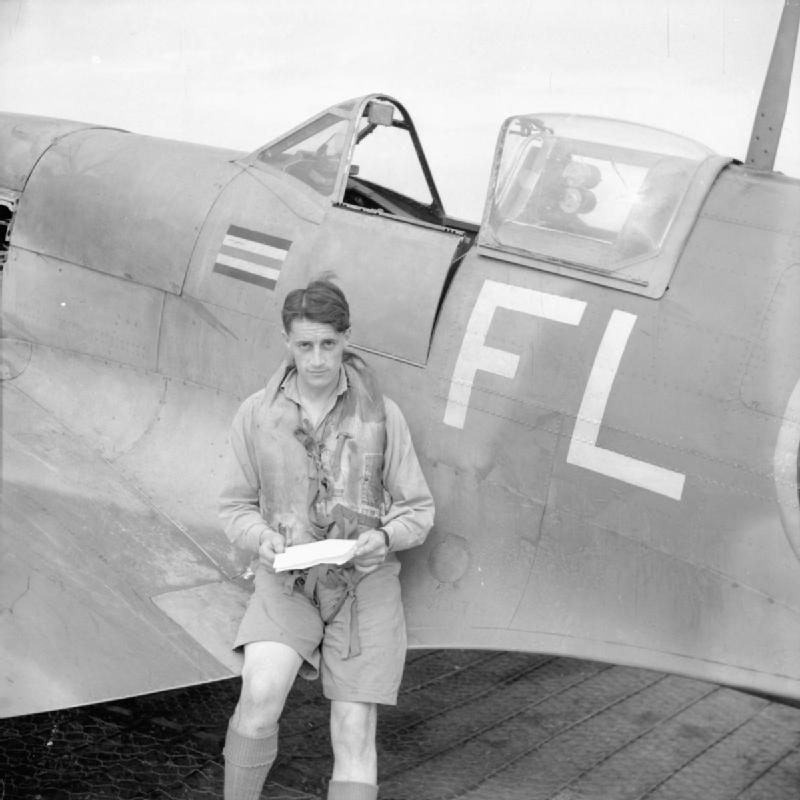 Born in 1914, Gray was accepted into the Royal Air Force (RAF) in 1939 after two previous attempts failed on medical grounds. He flew with No. 54 Squadron during the Battles of France and Battle of Britain, and had shot down 14 aircraft and had a half share in another by September 1940. He later added another 13 kills while leading fighter squadrons and wings in the North African and Italian Campaigns, and finished the war with a confirmed 27½ kills. After the war he held a number of staff and command positions in the RAF before his eventual retirement in 1961. He returned to New Zealand to work for Unilever. He died in 1995 at the age of 80.

Colin Falkland Gray and his twin brother Ken were born in Christchurch, New Zealand on 9 November 1914, the sons of an electrical engineer and his wife. He attended schools in the lower North Island and in Christchurch. He gained employment as a stock clerk in 1933, working at Dalgety and Company. In 1937, Gray, along with Ken, attempted to join the Royal Air Force (RAF) in 1937. While Ken was accepted, Colin failed for medical reasons.[1]

A second attempt also resulted in failure on medical grounds and after this, to improve his fitness, Gray took up sheep mustering. He was successful on a third application to join the RAF and was granted a short-term commission at the beginning of 1939. His flight training was conducted at the de Havilland flying school at Hatfield in Hertfordshire, England. He was posted to No 11 Flying Training School from which he graduated as a probationary pilot officer in October 1939.[1]

Gray was posted to No. 54 Squadron, at the time equipped with Supermarine Spitfires and based at Hornchurch, in November.[1] He was confirmed in his rank of pilot officer on 17 January 1940.[2] During the Phoney War he participated in patrols over the English Channel up until May 1940. The death of his brother Ken, in a flying accident on 1 May 1940, affected his morale.[1]

After initial combat on 24 May (claiming two 'probable' victories), Gray had a share in his first confirmed enemy aircraft, a Messerschmitt Bf 109, on 25 May 1940, while escorting a formation of Fairey Swordfish to dive-bomb Gravelines. His Spitfire was badly damaged in the engagement, and damage to the port aileron forced the aircraft into a dive that was controlled only with great difficulty. His aircraft had also lost its airspeed indicator and control of guns, flaps or brakes.[3] Despite this damage, Gray managed to force land safely at Hornchurch.[1]

On 13 July 1940, Gray shot down his second Bf 109 near Calais after a long chase at sea level. The pilot, Leutnant Hans-Joachim Lange of III./JG 51, was killed.[4] 54 Squadron was heavily engaged in the Battle of Britain, tasked with the defence of the approaches to London. On 24 July, he shot down Staffelkapitän Lothar Ehrlich of 8./JG 52. Gray observed Ehrlich to bail out into the Channel and swim for what Gray believed to be a dingy. He radioed the man's position, but the pilot did not survive the water conditions.[5] Alternately, it is possible his victim was Leutnant Schauff from III./JG 26.[6] On 16 August, he claimed two Bf 109s destroyed. No. 54's opponents were JG 54. I./JG 54 lost one Bf 109—the unnamed pilot being killed in a crash at Saint-Inglevert airfield after returning from the battle. 3./JG 54 and 9./JG 54 suffered the loss of one Bf 109 each and their pilots (one killed and one missing) over English territory. Their names are unknown.[7] On 24 August, his flight was attacked by elements of I./JG 54 near RAF Manston. During the battle, he shot down Oberleutnant Heinrich Held.[8] On 31 August, he downed Oberleutnant Karl Westerhof from 6./JG 3.[9] Another source identifies 9./JG 26 pilot Oberleunant Willy Fronhöfer as his victim.[10] By early September, Gray had claimed 14½ kills, and his squadron was sent north to rest and re-equip. He was awarded the Distinguished Flying Cross (DFC) on 15 August 1940.[1]

Gray was promoted to flying officer on 23 October 1940.[11] He then served with 43 Squadron, before returning to 54 Squadron. Gray remained with the squadron until he was posted to 1 Squadron.[12] He was promoted to flight lieutenant in August 1941[13] and the following month was awarded a Bar to his DFC. The same month, he was posted to No. 616 Squadron to serve as its commander until February 1942, at which time he took up a staff posting at 9 Group.[1]

Returning to operations in September 1942, Gray, promoted to acting squadron leader, took over No. 64 Squadron, which operated over the English Channel and France. At the end of the year, he was posted to the Mediterranean Theatre,[1] firstly to 333 Group[12] and then in January 1943, to command of No. 81 Squadron, based in Algeria, the first unit to fly the Spitfire Mk. IX in the Middle East. During his service with the squadron, he shot down a further eight aircraft bring his personal tally to 22.[1] For his leadership and actions during this period, Gray was awarded the Distinguished Service Order.[12]

Gray was promoted to acting wing commander on 1 June 1943 and took over No. 322 Wing, which at the time was based on Malta. Conducting patrols over the Italian coast and supporting the Allied invasion of Sicily, he shot down a further five aircraft. His final kills came on 25 July 1943, when he shot down two Junkers Ju 52 transports.[1] He was promoted to war substantive squadron leader on 1 September 1943.[14] Later that month, he returned to England for a rest from active duty.[1]

A second Bar to Gray's DFC was awarded in November.[1] He returned to operational duty in England, with 9 Group.[12] In August 1944, he was appointed Wing Commander of the Lympne Wing, which carried out operations over France and the occupied Netherlands.[1] He did not increase his tally of kills and finished the war with 27 aerial kills, two shared destroyed, six probable kills, with a further four shared probables,[15] the top New Zealand fighter ace of the Second World War.[16]

Gray died in Kenepuru Hospital, Porirua, on 1 August 1995, survived by his wife, Betty, whom he had married in October 1945, and his four children and a stepdaughter.

FROM A MODELLING SITE (link right):

It is also with mentioning that Gray flew more than the Spitfire IX aircraft mentioned above when Commanding 81 Squadron (from 25 January 1943) and later 322 Wing (W/Cdr DFC, DSO), the breakdown of the Spitfire IX's he flew from March through August 1943 is as follows.

I hope some of what I have shared with you is of some help to you.