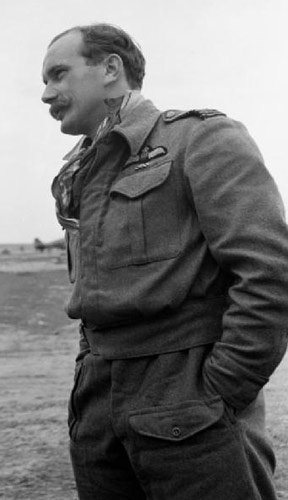 < = expand >
Ronald Berry was born in Hull on 3rd May 1917 and attended Riley High School and Hull Technical School. After leaving he was employed in the department of the City Treasurer.

He joined the RAFVR in April 1937 and did his weekend flying training at 4 E&RFTS Brough. In February 1939 he spent three weeks with the RAF and was attached to 66 Squadron at Duxford where he was able to fly the Spitfire.

Called up at the outbreak of war, Berry spent a short time at a Gunnery School before joining 603 Squadron at Turnhouse on 17th October 1939.

In November he was one of a detachment sent to Montrose to protect the airfield there. On 7th December the 603 pilots drove off a formation of He111's and damaged at least two.

On 7th November Berry shared a Me110, on the 8th damaged a Me109, on the 17th destroyed a Me109 and on the 23rd he shot down an Italian and probably another. These biplane fighters were escorting bombers attacking coastal shipping.

By January 1941 Berry was 'A' Flight Commander as an Acting Flight Lieutenant. When his operational tour ended in April Berry went to Turnhouse on the 25th as a Fighter Controller.

In January 1942 he was given command of 81 Squadron. The pilots had just returned from Russia, leaving their aircraft there. In October the squadron sailed for Gibraltar, where it picked up tropical Spitfire Mark Vcs.

On 8th November 1942, the day of the landings in North Africa, 81 occupied Maison Blanche airfield, probably the first Allied squadron to land. Next day Berry destroyed a Ju88 and shared in destroying a Ju88 and a He111, on the 11th he damaged another Ju88, on the 14th damaged a Mc200, on the 26th damaged two Me109's and on the 28th shared another.

At the end of his operational tour he was awarded the DSO (gazetted 1st June 1943).

Berry returned to the UK and on 29th June 1943 he joined 53 OTU Kirton-in-Lindsey as OC Training Wing. He went to HQ ADGB in April 1944 and later took a course at the Army Staff College at Camberley.

He commanded RAF Acklington in 1945/46, graduated from the Joint Services Staff College in 1955 and held a series of staff appointments in Fighter and Bomber Commands before his retirement on 29th January 1969 as an Air Commodore.

In 1965 he had taken part in Sir Winston Churchill's funeral procession.