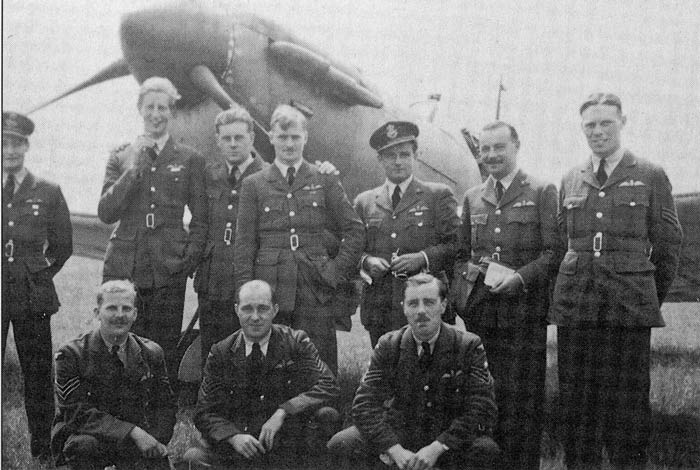 < = expand >
Fred Percy Burnard was born on 9th March 1915 in Scarborough. He attended the Friarhoe Senior Boys School in the town. He joined the RAF in January 1930 as an Aircraft Apprentice and passed out in December 1932 as a Metal Rigger.

He served in Iraq and Egypt. He later applied for pilot training and was selected. After completing his training he passed out as a Sergeant-Pilot.

Burnard was serving with 616 Squadron at Leconfield in June 1940. On 3rd July he shared in destroying a Do17 and on 1st September he probably destroyed a Me109 and damaged another.

Burnard joined 74 Squadron on 27th October 1940. Surprised by Me109's over Dover on 1st November, he returned to base with his Spitfire P7501 damaged. He was posted to 85 Squadron on 15th November.

Commissioned in March 1941, Burnard went to 54 OTU Church Fenton from 85 Squadron on 24th November 1941 as an instructor. Burnard served in India and was released from the RAF in 1947 as a Squadron Leader.

He trained as a teacher and worked in the East Riding of Yorkshire, becoming deputy head teacher at Hilderthorpe Junior School.

He died on 27th April 2007 in Newtonmore in the Scottish Highlands, having lived at Laggan in retirement.

He was buried in Laggan churchyard.