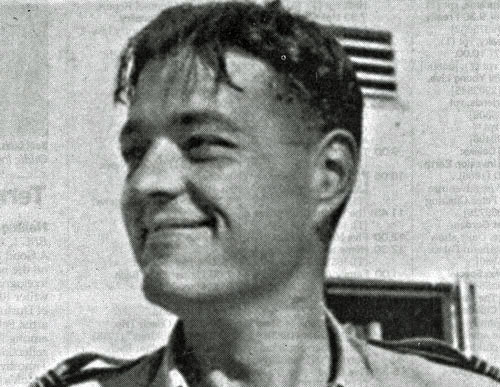 < = expand >
John Michael Vowles Carpenter was born on 9th April 1921 in Rhos-on-Sea. He was educated at Clifton College and on leaving there he joined the RAF on a short service commission.

He began his initial flying training at 15 E&RFTS Redhill on 1st May 1939. After a short induction course at No. 1 RAF Depot Uxbridge, Carpenter went to 10 FTS Ternhill on 10th July on No. 12 Course, which ended on 9th December 1939.

On 21st April the squadron embarked on HMS Furious for Norway, flying off three days later, to land on frozen Jake Lesjaskog. By the 26th all Gladiators were either destroyed or unserviceable, so 263 returned to the UK in the carrier.

In May 1940 the squadron was involved again in Norway. From the 21st, when it landed at Bardufoss, until it re-embarked on HMS Glorious on 6th June 263 gave a good account of itself, covering the evacuation of the Army and flying offensive patrols. The carrier was sunk by enemy action soon after sailing and nearly all 263's pilots were lost. Carpenter did not fly on to the carrier and returned to the UK in the MV Arandora Star.

He joined 222 Squadron in late June 1940 and flew his first sortie on 2nd July. On 31st August he claimed a probable Me109, on 1st September he destroyed a Me109 and on the 3rd a Me110.
On 4th September Carpenter destroyed a Me109 over Maidstone. His Spitfire, P9378, was then hit, possibly by anti-aircraft fire. He baled out, wounded and the aircraft crashed at Boughton, Kent. He rejoined the squadron on 24th October 1940 and on the 30th he damaged a Me109.

Carpenter stayed with 222 until 22nd April 1941, when he was posted to 46 Squadron at Sherburn-in-Elmet. The squadron was preparing to leave for the Middle East. On 20th May it embarked on HMS Argus. At Gibraltar pilots and aircraft were transferred to the carriers HMS Ark Royal and Furious. On 6th June they flew off to Hal Far, Malta.

On 27th December he shot a Ju88 down into the sea. Carpenter, who had been a Flight Commander since early October 1941, was awarded the DFC (gazetted 2nd January 1942).

Carpenter completed his tour and was posted to South Africa, where he instructed at 66 and 42 Air Schools.

In June 1943 he returned to the Middle East, where he was briefly with 417 Squadron, before rejoining 92 Squadron in Italy, as a Flight Commander.

In November 1943 Carpenter was serving with 145 Squadron in Italy and in January 1944 he was given command of 72 Squadron at Lago. On 11th April he was posted away, received a Bar to the DFC (gazetted 7th July 1944) and returned to the UK.

He went to Hawker's as a production test pilot, testing Typhoon and Tempest fighters.

Carpenter was granted a permanent commission in September 1945. He held numerous flying appointments on fighter squadrons before being appointed as the adjutant of 601 (County of London) Auxiliary Squadron.

He commanded 80 Squadron from 1951 to 1954, providing air defence for Hong Kong, initially with Spitfires and then with the powerful twin-engine Hornet. After serving at HQ Fighter Command, and an appointment as a fighter controller, Carpenter retired from the RAF on 31st December 1959 as a Flight Lieutenant, retaining the rank of Squadron Leader.

In retirement he operated hotels on Bermuda and in South Africa. After his first wife, Gwendoline, died in 1974 he took up sailing; he and his dog, Hardy, sailed to Poole, where he was reunited with a wartime friend, Becky, who had once worked at Chez Nina, the London nightclub beloved by RAF pilots. They married, and Becky ran a members' club, which she called the New Fitz, while Carpenter had a café in the area.


+++ FROM the telegraph obituary on the right (in case it disappears, letter home) +++

Squadron Leader 'Chips' Carpenter, who has died aged 83, accounted for at least eight enemy aircraft in the Battle of Britain and the siege of Malta.

After returning to No 222, he captured the mood of a fighter pilot's life when he wrote to his mother on October 30: "More exciting events to report. We ran into 80 enemy fighters at 30,000 ft and I dived down and had a good old blast at one of them, but before I had finished I was myself attacked by two Me 109s and was absolutely peppered with cannon fire. The instrument panel broke up in front of me and the engine started thumping and vibrating when I thought it might shake the wings off.

"I managed to struggle back to the aerodrome after coming down through 3,000 ft of thick cloud with no instruments. I managed with a bit of luck and then made an ordinary landing, but one wheel collapsed and I was stuck in the middle. There were over 300 holes in the fuselage, the wireless had been shot away and the aircraft looked like a sieve. Nothing more to tell you now. Will write again soon. Love John."