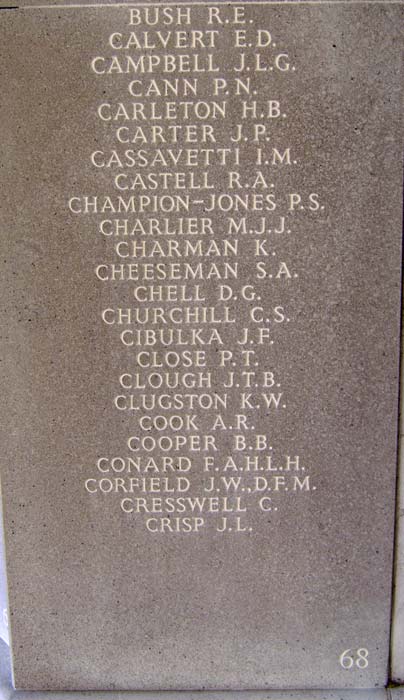 < = expand >
John Lawrence Crisp joined the RAF on a short service commission in August 1935. He went to 2 E&RFTS Filton on 25th August 1935 and afterwards to No. 1 RAF Depot Uxbridge. On 1st November Crisp moved to 11 FTS Wittering and completed his training at No. 1 Armament Training Camp at Catfoss from 27th March to 28th April 1936. He joined 18 Squadron at Upper Heyford. Crisp was posted to 49 Squadron at Bircham Newton on 1st June 1936.

On 8th March 1937 Crisp was aloft in a Tiger Moth along with Plt Off R A B Learoyd. Crisp was held responsible for some unauthorised low flying that resulted in a crash landing, damage to the aircraft and injury to Plt Off Learoyd. In peacetime this was enough for Crisp to be dismissed from the RAF on 8th June 1937 by sentence of a General Court Martial. Learoyd went on to be awarded the VC for the attack on the Dortmund Ems Canal on 12th August 1940.

Crisp joined the RAFVR at Portsmouth on 28th May 1939 as an Airman u/t Pilot. He was called up on 1st September 1939 and reported to 3 ITW Hastings on 3rd October. He moved on to 9 FTS Hullavington on 1st January 1940 and, with the course completed, went on to 5 OTU Aston Down on 3rd June. After converting to Hurricanes Crisp joined 43 Squadron at Tangmere on 21st June 1940 and made his first operational sortie three days later.

During an action off Selsey on 19th July Crisp's Hurricane, P3468, was damaged in an attack by Fw. Blazytko of III/JG27 but he returned to base, unhurt.

Crisp damaged a Me110 on 13th August. He was shot down by Me109's in an engagement off Bognor on 16th August, in Hurricane L1736. He baled out and broke his thigh in a heavy landing.

He was 25 and is commemorated on the Runnymede Memorial, panel 68.