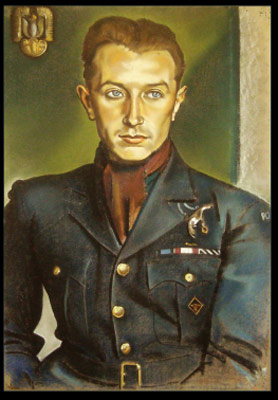 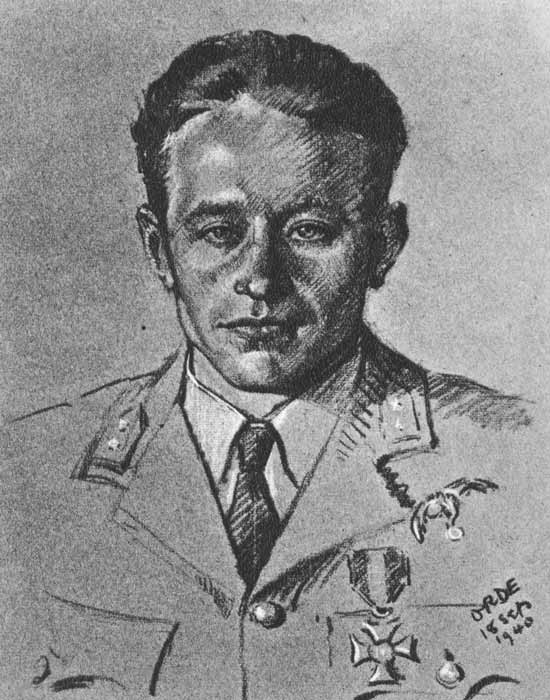 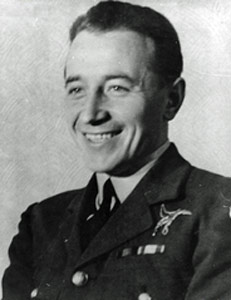 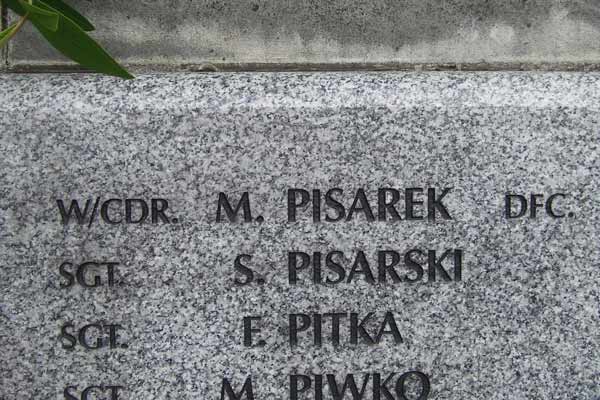 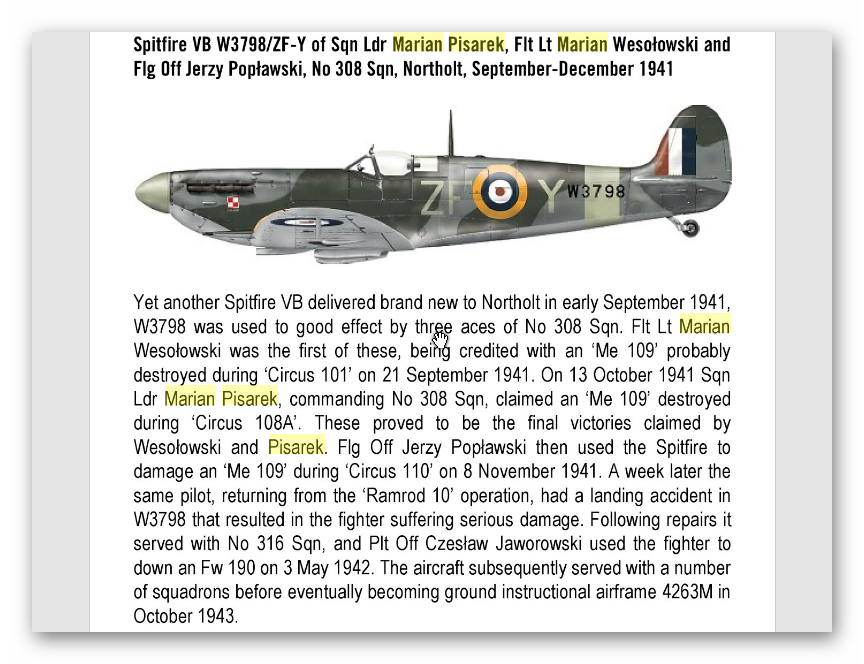 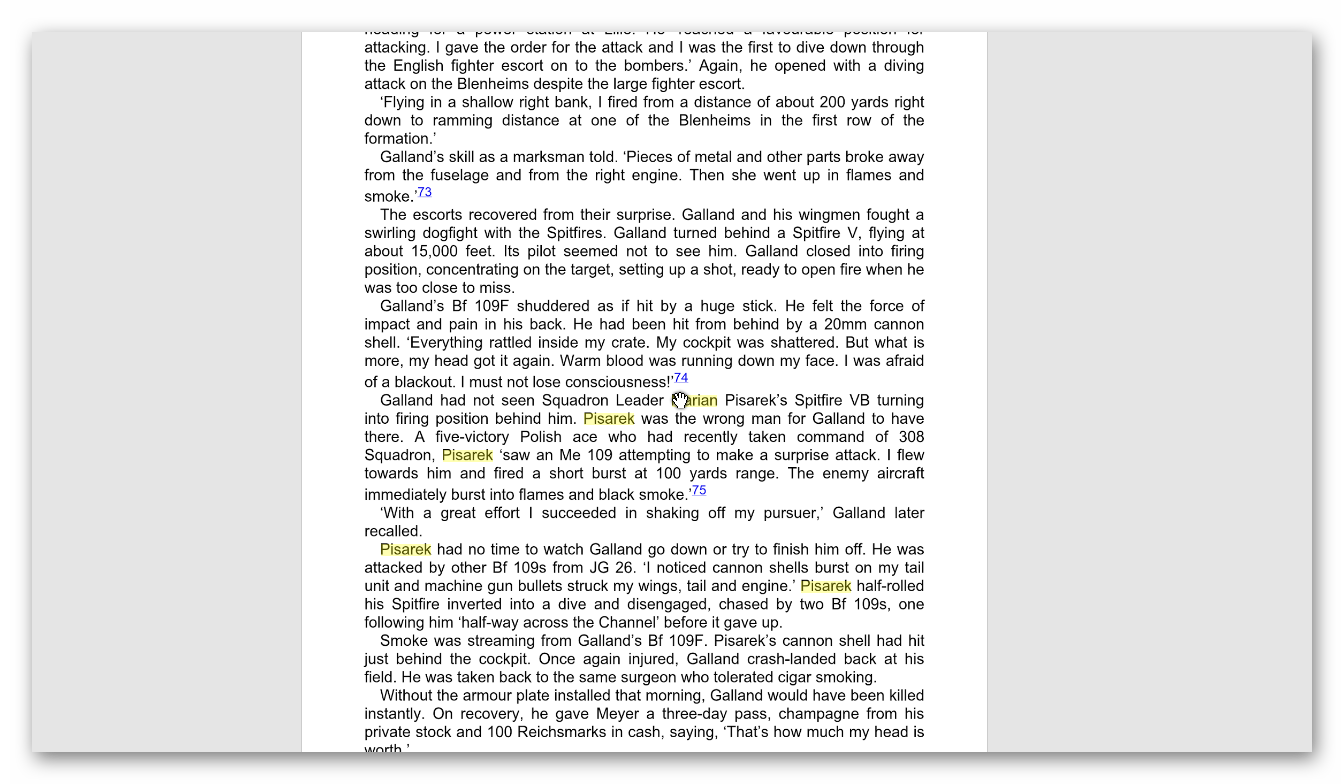 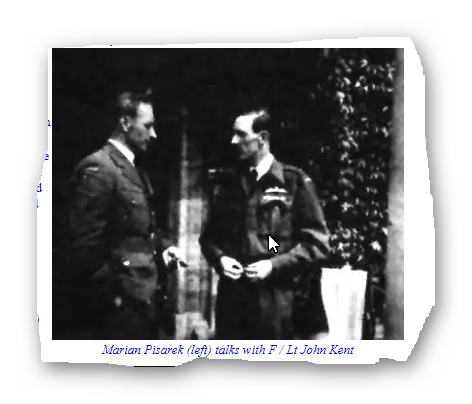 < = expand >
Marian Pisarek was born on 3rd January 1912 at Losie near Radzymin, east of Warsaw in Poland. He was educated at Radzymin, Chem and Warsaw. In 1932 he commenced his military service and spent two years in the infantry.

He escaped to Romania and made his way to France via Yugoslavia and Italy. He was involved there with the training of Polish airmen and did not fly operationally. Moving from airfield to airfield as the Germans advanced, Pisarek ended up at Gaillac near Toulouse. He was part of a group of Polish airmen who flew in a Caudron Goeland aircraft to Oran via Perpignan. They then travelled via Casablanca and Gibraltar to the UK.

Pisarek arrived in England on 23rd June 1940. After assessment and converting to the Hurricane he was posted to 303 Squadron at Northolt on 21st August.

He claimed a Me109 destroyed on 7th September. On this day Pisarek was himself shot down by a Me109 and baled out, unhurt. His Hurricane, R4173, crashed in the back garden of 40 Roding Road, Loughton, Essex, killing three ARP members in an air raid shelter.

On 15th September Pisarek claimed a Me109 destroyed, on 5th October destroyed a Me110 and damaged another and on the 7th destroyed another Me109.

Pisarek was posted to 315 Squadron at Acklington at its formation on 21st January 1941.

On 30th March Pisarek was posted to 308 Squadron at Baginton as a Flight Commander. He took command of the squadron on 23rd June 1941. He destroyed Me109's on 2nd and 17th July, probably destroyed one on the 22nd and destroyed another four Me109's on 14th August, 20th and 21st September and 13th October.

Pisarek was awarded three Bars to the KW and the DFC (gazetted 30th October 1941).

He was posted away to HQ 11 Group on 8th December 1941 as Polish Liaison Officer. Pisarek was appointed Wing Leader of the Northolt Polish Wing on 17th April 1942.

He was killed on 29th April leading the Wing over France in Spitfire BM307/RF-Q. He was shot down by a Fw190 during Operation Circus 145. His body was not recovered.

Pisarek is remembered on the Polish Air Force Memorial at Northolt Panel 55.