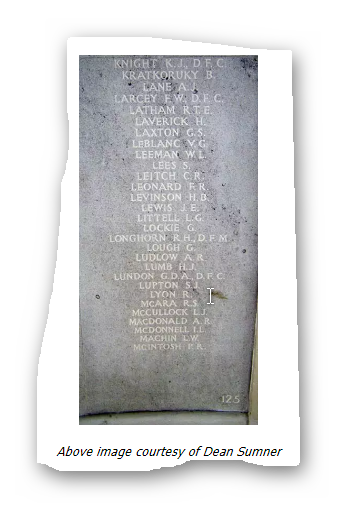 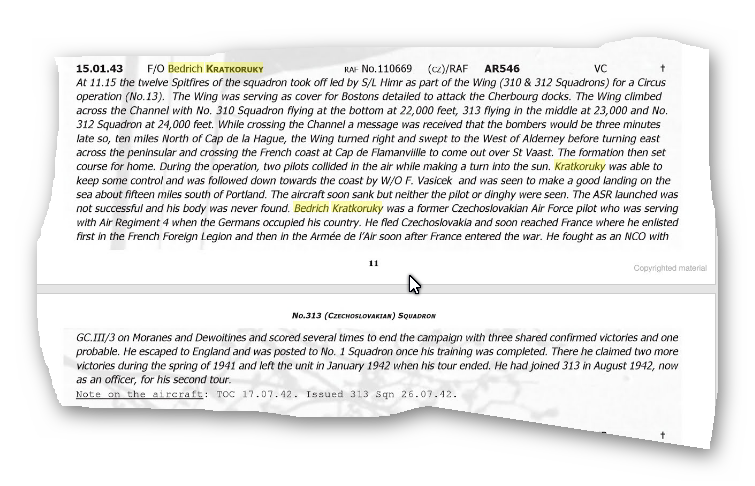 < = expand >
Bedrich Kratkoruky was born on 8th October 1913 at Horatev, Czechoslovakia. He was in the Czech Air Force and in 1939 after the German occupation he escaped to France.

As a non-French citizen he could only join the French Foreign Legion. But after the outbreak of war Kratkoruky was able to transfer to l’Armee de l'Air. He trained at the Fighter Training School at Chartres and on 18th May 1940 was posted to III/3 Fighter Squadron, operating Dewoitine D520’s from Cormeilles-en-Vexin. The next day he probably destroyed a Me109 and shared in the destruction of another and on the 20th Kratkoruky shared in destroying a He111. He was then himself shot down, making a successful forced-landing. He shared in the destruction of another He111 on 13th June.

After the fall of France, Kratkoruky made his way to England and was sent to convert to Hurricanes at 5 OTU Usworth. On 4th October 1940 he joined No. 1 Squadron at Wittering. On 11th May 1941 Kratkoruky intercepted a He111 over Canvey Island in the early hours of the morning. After a chase, he attacked it near Southend. When last seen the enemy aircraft was at 2,000 feet, losing height, with both engines smoking. Coastguards at Southend later reported that it crashed into the sea off Shoeburyness. On 25th May Kratkoruky destroyed a Me109.

On 15th January 1943 Kratkoruky was flying Spitfire AR546 with the Czech Wing, escorting Bostons to bomb the docks at Cherbourg. Ten miles north of Cap de la Hague, when 313 made a sharp turn into the sun, Kratkoruky collided with F/Sgt. Blaha. Neither pilot baled out and it is believed that Blaha was killed instantly.

Kratkoruky attempted to glide back to the English coast. He ditched successfully some fifteen miles south of Portland but his aircraft sank nose down and he was lost.

Kratkoruky is commemorated on the Runnymede Memorial, Panel 125.

He married Miroslava Pohnetalova in the district of Westminster March 1941.